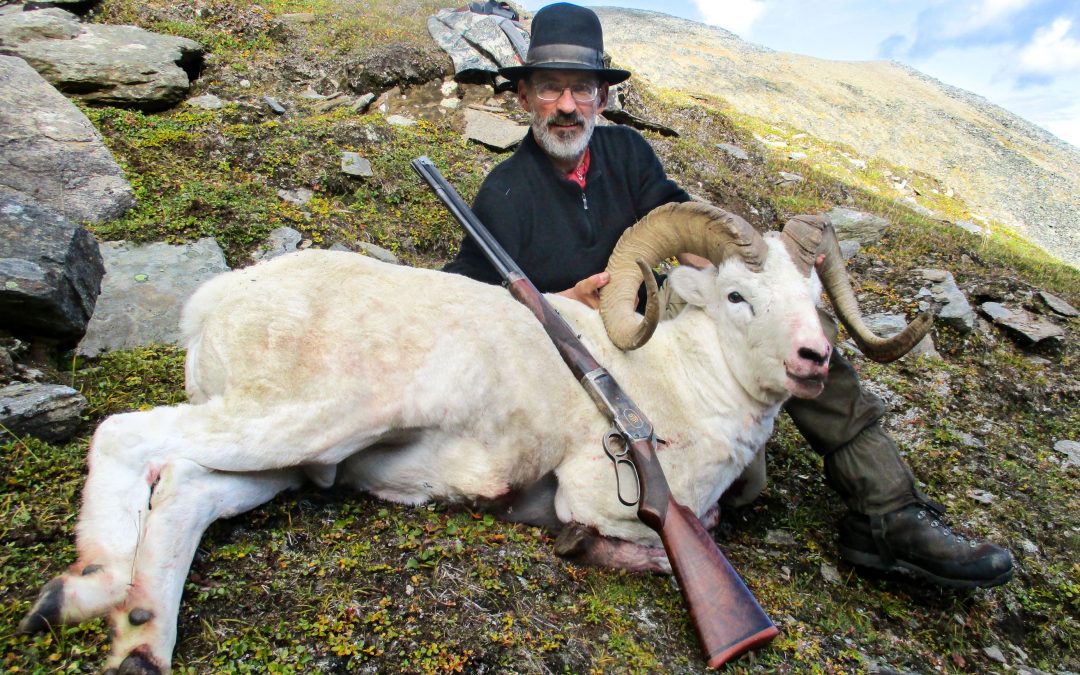 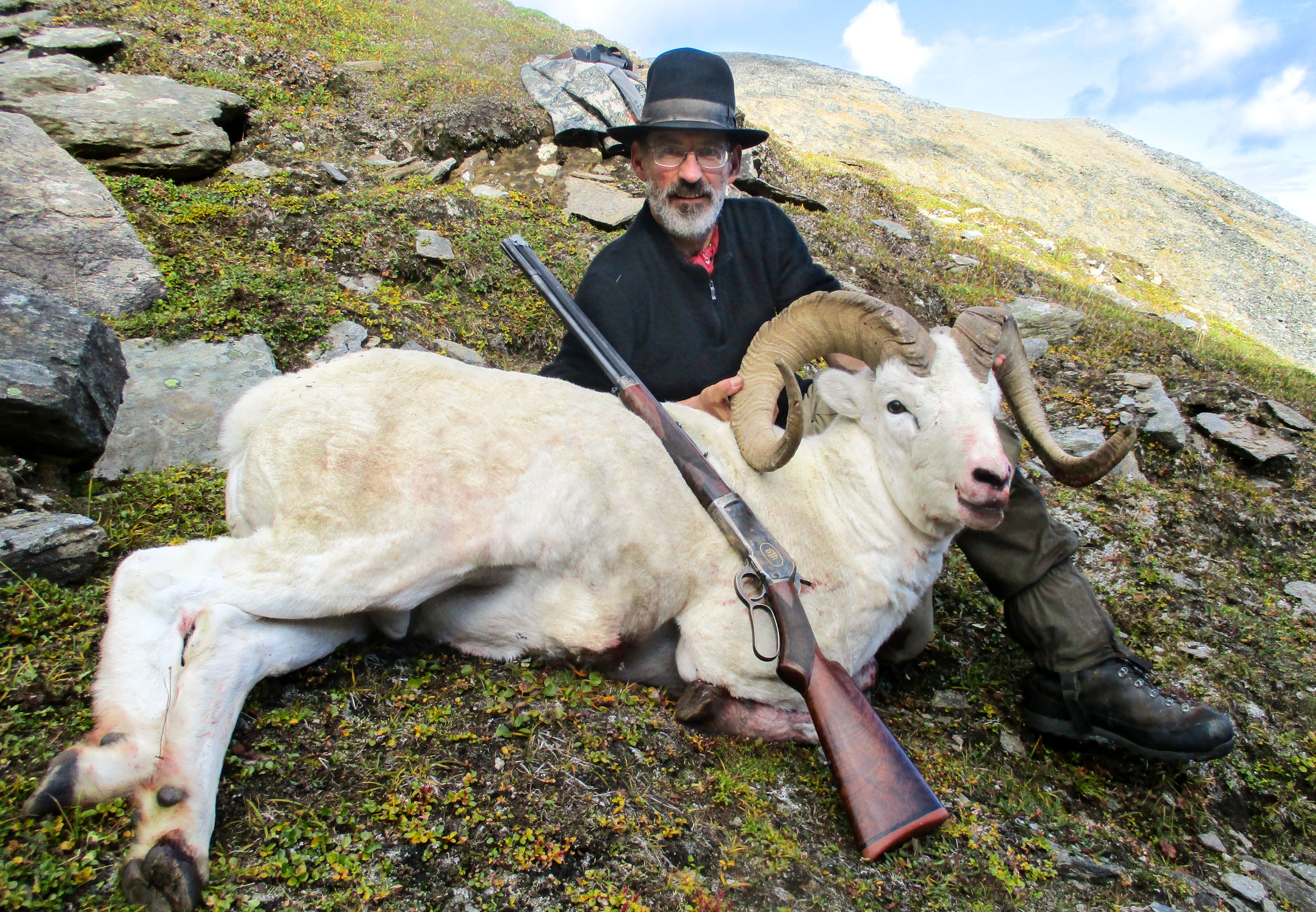 Doug shot his Dall ram with his restored Winchester 1886 in .475 Turnbull

I have a love/hate relationship with sheep hunting. To me, sheep hunting is about getting wrapped up in the experience. I love the beautiful mountains to the west, smelling the crisp air. I love the Alaskan country: Seeing the mountains, moose, bear, and eagles. But there’s also the hate part: 6-9 months spent getting into shape for climbing the mountains with a 50-60 pound pack, sleeping in a small tent, trying to stay warm and dry, and eating freeze-dried meals. Somehow none of that’s enough to keep me away. At the end of the day—exhausted, cold, and wet—nothing beats the experience of hunting a Dall sheep in the Alaskan wilderness. 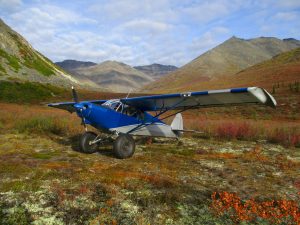 A Piper PA12 was used to shuttle hunters and gear into Dall sheep country.

For my sheep hunt in 2016 I went to the Brooks Range with Erik Salitan from Wiseman, Alaska. Erik grew up about 20 miles south of me here in Upstate New York, but moved to Alaska, attended college, and has been there ever since. He took many guiding jobs until he was able to get his outfitter’s license and open Bushwhack Alaska with his wife, Martha Mae. They hunt sheep, moose, and grizzly bear in the Brooks Range as well as world-class trout and salmon fishing and hunting in Iliamna, AK. I had come to their camp to fill my tag, and I wouldn’t be disappointed.

But we all know the hunt starts long before you get to camp. I had booked my trip back in 2015. Erik asked me what firearm I planned on using for the hunt. Of course I said my .475 Turnbull 1886. He looked at me a bit skeptically, not convinced I had chosen a good long-range rifle. I said I understood, but that was what I was going to use. He shrugged and said, “Ok, see you in August, then.”

Now that I had my hunt booked, it was time to get ready: Drop 20 pounds off the waist. Break in shoes. Get clothes together. Order backpack from Frontier of Alaska in Anchorage, AK. Enroll in “boot camp” at a local gym. Pounds were coming off, strength was increasing. When summer arrived, I started hiking with my pack filled with water bottles. Hiking up and down the hills I worked up to 70 pounds in my pack and 20 minute miles: I was ready.

Once I had the rest of my gear ready to go I needed to get my .475 sighted in so I could hit my target. Using my elevator sights I shot the rifle out to 300 yards. I wrote down the Minute of Angle (MOA) and at what distance each notch on the elevator was good for, which I then taped to the barrel of my rifle. My Leica Geovid range finding binoculars helped establish precisely the yardage of each target.

It was finally the first day in camp. I met up with Erik, Martha Mae, and my guide, Johnny, in the main camp. We got our plan together and prepared to fly out to a gravel bar some 30 miles away. Once we landed we organized everything and headed off up the valley to our “home.” There we pitched our small “two” man tents to sleep in and spread out. We made a small fire and heated up water for dinner. While eating we glassed the area and saw some sheep way off in the distance.

The next morning we woke to the sound of rain. It rained on and off for two days, keeping us in the tents nearly all the time. Good thing I brought a good book to read! 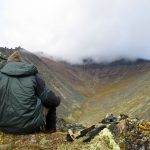 Doug’s guide Johnny glasses up the valley. The sheep were about 1.5 miles away. The men worked to the left along the backside of the ridge to a point about 800 yards above the sheep. 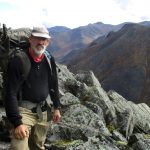 Hiking around the back side of the ridge allowed the hunters to look down on the sheep.

Finally on the third day the weather broke. We found a few sheep that we wanted a better look at, so we packed light (food, rain gear, warm clothes, etc.) and headed out. We hiked up the valley, crossing many small streams, to a point where we had to start climbing. We found the area—up and up and up—where Johnny has glassed sheep in previous years. We climbed up slippery rocks, gravel that just wouldn’t hold, slid down a little with each step. Finally we made it to the ridge line, and rested just under the ledge for a while. Johnny took a look up at the other valley: About a mile away he saw some sheep. He pulled out the spotting scope and decided there are a few that needed a closer look. We walked, crawled, and slid along the back side of the ridge to a point about 800 yards from them.

From here Johnny could tell that there are two legal rams out of the seven sheep we saw. There was very little cover to block them from spotting us on the stalk. Luckily we had camo that matched the foliage running down to them. We made our plan: Put on our camo, find a spot further down with the most coverage, and work our way slowly and quietly toward them to see how close we could get.

We set off down the slope on our butts, foot by foot, slowly and carefully down toward the sheep. Oblivious to our presence, the sheep all bedded down to rest. We kept moving toward them: 200 yards, 300 yards, 400 yards, 450 yards. Still they were lying down; we remained unnoticed as we descended on the sheep.

Now at almost 500 yards down the hill, we had closed the distance to 325 yards. Still too far; I had to be within 300 yards to be able to accurately use my sights and measurements. Down we went. The sheep stood back up, and started grazing. Still we were undetected. We finally got to just under 300 yards. Between us and the sheep there was a wide open area with no cover, and lots of noisy rocks. Now the decision: What to do? I knew that range. I had practiced all summer, shooting at longer ranges than this and hitting the mark. I knew my yardage, I had my “cheat-sheet.” With a solid rock rest, I put my sights on the fifth notch and knew where the bullet would hit. There was no wind to deal with. We were almost at the bottom of a great big open bowl. This was the place, and now it was the time.

I set my sights on the largest ram – full curl on one side, broomed on the other. Legal. I carefully took aim and squeezed the trigger. BOOM! I made a solid hit with the first round. The ram walked around a bit and lay down about 20 yards from where he was standing, just out of our sight. The rest of the sheep just stood where they were, not knowing what happened or where the shot came from.

We left the ram lying there for 15 minutes before I finally got up and stalk down towards him. As I got to about 100 yards away from the flock (standing, watching) I got to a point where I could see my ram. He saw me and stood up, broadside. I shot again and down he went. The rest of the sheep finally moved off slowly without a sound. I had my ram!

We took pictures and then got down to the task at hand. We skinned the ram out, quartered and packed up the meat, and off we went for our four mile hike back to camp. About a mile out I stepped on a rock and heard steel on granite. I thought to myself, Damn! That left a mark. Later I saw the mark on the barrel near the muzzle. Now when I’m hunting with this rifle I look at the mark and smile, bringing back the memories of my sheep hunt in the Brooks Range.

For more information on Bushwhack Alaska and the hunts and fishing trips they offer, please visit www.bushwhackalaska.com, or contact: 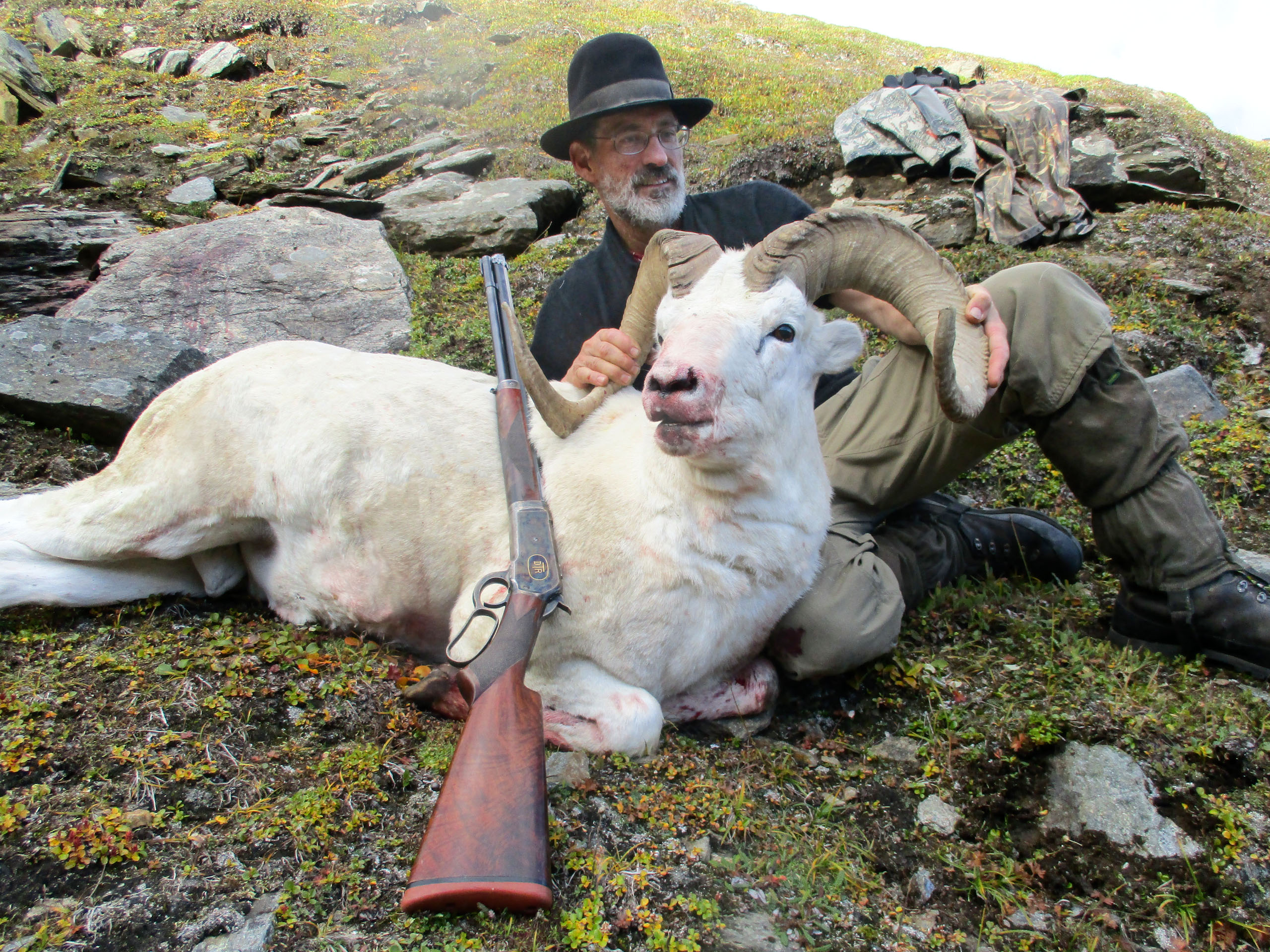 A yardage and windage “cheat sheet,” along with a great deal of practice, helped Doug bag a ram in the Brooks Range while hunting with his restored Winchester 1886.