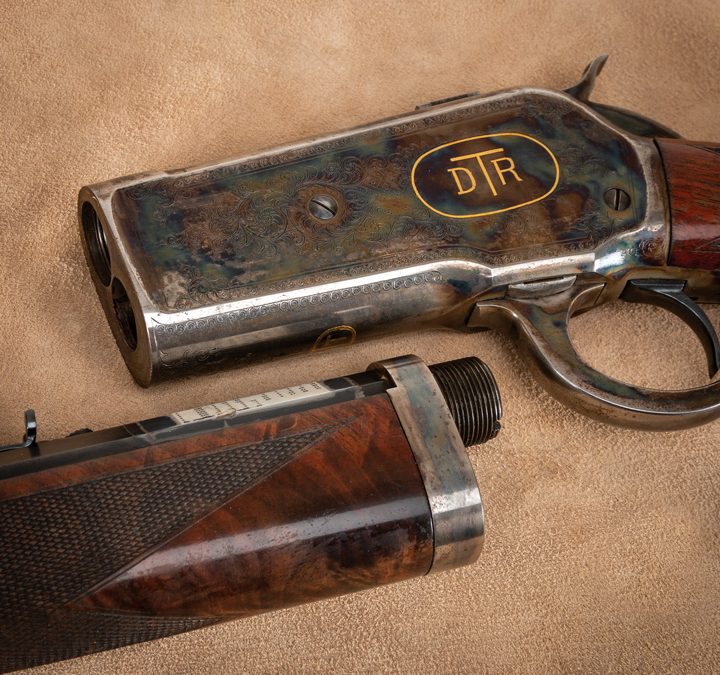 Our 2019 calendar features a spread of Doug’s personal Winchester 1886 from 1888, which he restored and converted to .475 Turnbull in 2007. The spread focuses on all of the “imperfections” his rifle has collected over the years on various hunting trips. I wanted to find out more about those stories, so we sat down to discuss them in more detail. 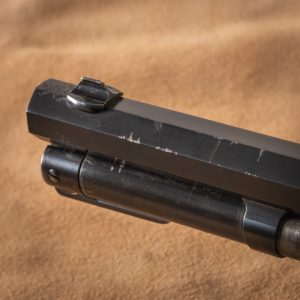 1.“Marking the Occasion: When you fall backwards on your pack after slipping on a boulder and hear rock against metal, you know it’s going to leave a mark. No worries, just another reminder of the magnificent animal I took on that hunt.”

I see when Mike made the calendar he put a photo of a Blue Wildebeest next to this point. Is that the magnificent animal you’re referring to?
No, that wasn’t Mike’s intention. This story actually refers to my sheep hunt in 2016. That’s a good photo, though. I’ll have to tell you about that hunt a different time. For this one we were hunting dall sheep with Bushwhack Alaska, out of Wiseman, AK. Here’s the story of how I got that mark:

It happened while we were packing the sheep out. We had spotted the animal, stalked it and gotten close enough to make the shot, and taken it down. After we’d dressed it out and packed it all up in our packs we had to head back down the river valley. We were crossing larger and larger granite stones, and after a 14 hour day of hiking, spotting, and stalking I wasn’t as sharp as when we started out. All of a sudden I stepped on a rock and my feet slip out from under me, sending me backwards into the granite rocks. I could hear metal grinding against the hard rock, and I remember saying to myself “I wonder what part of the rifle that was?” but I got up and kept going. When we stopped for water and a break I got the pack off my back so I could take the time to survey the damage. I could see some fresh abrasions on the edge of the octagon barrel by the muzzle. I thought to myself “Damn!” It frustrated me, but I quickly realized that this was just another memory that had been added to my rifle that would be there forever, helping me remember that wonderful adventure. 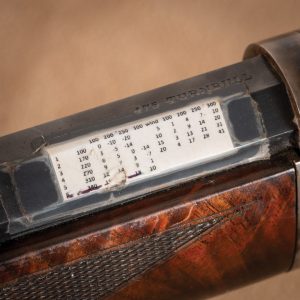 2. “Measure Twice, Shoot Once: I spent countless hours shooting, testing and measuring, over and over, to formulate my sight elevator cheat sheet. Taped to my barrel for quick reference. Good to go.”

I imagine most people wouldn’t put tape on their fancy, highly-finished firearms. What do you say to people when they tell you the firearms you restore are too nice to take hunting?
As with any custom firearm or restored gun there are numerous ways to keep them: As a safe-queen, occasionally used for shooting and possibly hunting, or as one of your go-to pieces for hunting and shooting. I’ve decided to use this rifle as one of my main hunting guns. I’ve learned through countless hours of shooting how the gun fits me, how it operates, and how it shoots. By taking the time to do various ballistic calculations I have created a very accurate rifle; putting the ballistic calculations on paper and taping them to the barrel this has allowed me to very quickly stretch the capabilities of the cartridge and rifle because I know exactly where it shoots, out to the various yardages. Between that and my Leica Geovid Range Finder binoculars I’ve got a great combination in the field or on the bench. 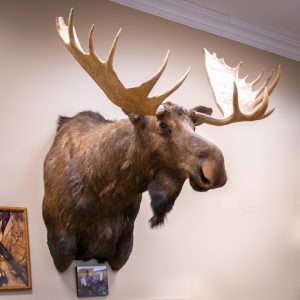 3. “Just a Little Moisture: Forend arched away from the barrel because of all the water it took on during my 2008 moose hunt. Nothing a little bit of drying time and glass bedding couldn’t fix. No problem.”

Is this the moose we see hanging in the show room? That’s a huge animal! What were some of the challenges of that particular hunt?
Yes, that’s the moose! I took that on my 2008 moose hunt with Grizzly Skins of Alaska and guide Taj Shoemaker. Probably the main challenge of the Alaska hunt was moisture. It rained almost every day, from light drizzle to occasional downpours. This is just typical of Alaska hunting; you have to be ready for it. It’s a combination of keeping yourself dry and warm and trying to keep your rifle as dry as you can that makes any Alaska hunt potentially very challenging. After about five days of being wet most of the day and trying to dry the rifle out in the evenings I noticed the forend was bulging out and that the wood had swelled from water absorption. It still worked flawlessly, and I was very careful not to damage it any further. When the outfitter asked, “What are you going to do?” I said, “Just let it dry out and see.” I came back from that hunt and two weeks later we went to Kansas on an antelope hunt which was extremely dry. The moisture went away and the wood returned to its original state, showing absolutely no sign of damage. Just to be safe, after it had completely dried I glass bedded the internals and made repairs. Now you can’t tell that there was ever any damage at all! 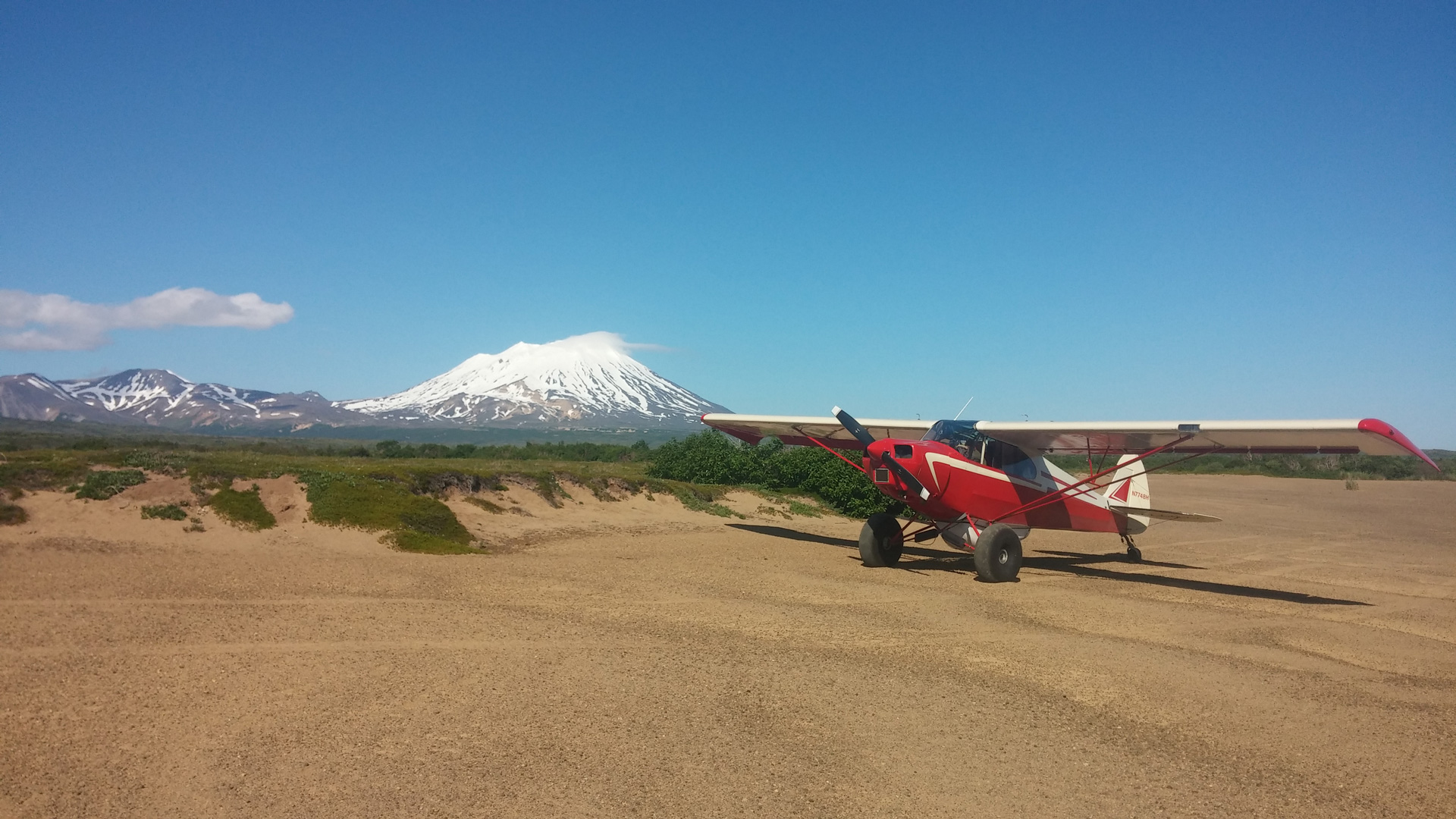 I know Alaska holds a special place in your heart. Can you tell us about one of your favorite Alaskan memories, from this hunt or otherwise?
Alaska is a very special place. I’ve hunted moose, bear, and dall sheep there. Each trip was challenging, and I have lots of great memories from all of them. There’s a story that comes to my mind from my moose hunt in 2008. After the moose was down I remember standing there in awe at the size of this magnificent animal. We started dressing it and getting it prepped for packing it out to the river. The moose was reduced to 13 various pack loads. We all shouldered a pack and got started back toward camp. As we were packing the first load out we ran into a brown bear, coming to the kill site. When we came back for our second load we had to run that bear off. We took the second load to the river at which point we found a hind quarter was missing and could see that it was dragged off into the bushes. Carefully, making no noise, we followed the trail into the woods and ran the bear off the hind quarter, retrieving it back to the meat pile at the river bed. I stood guard over the meat pile and as soon as the guide and assistant were out of sight the bear started to come back to the river. It was my job to make a bunch of noise to keep the bear from coming and trying to take the meat.

Were you scared?
I had a rifle! 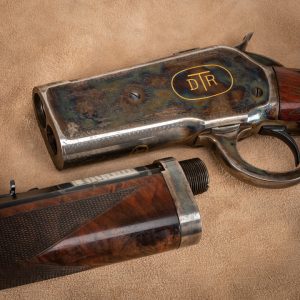 4. “Easy Traveling: Takedown conversion was a must for 10+ years of adventure hunting the ’86 has seen. Its full threading takes a few extra turns, but the added durability is worth it.”

Besides the take-down, are there other upgrades or add-ons (scopes, sights, slings, etc.) that you swear by?
Every hunting rifle should have a sling. It helps you carry it as you’re walking through the brush, it frees up your hands, it provides a safe way to hang your rifle from the ground while dressing out the animal, and you can use it to stabilize your firearm while shooting, improving accuracy. 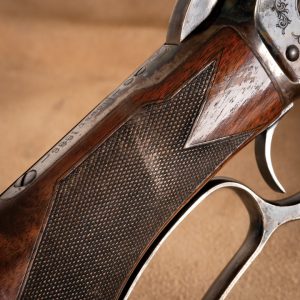 5. “Showing the Miles: Having the ’86 close at hand during my 2016 sheep hunt meant strapping it to my pack. It meant some checkering scars too. I don’t mind the reminder.”

Do you think you’ll ever get this rifle restored again?
No, I’m not looking to have it restored again someday. I’m keeping it as-is. I’ve got the memories. In the future if my grandsons or somebody wanted to that’s fine, but I have no desires to bring it back to new again.

What’s in store for you and your ’86 in the future?
I’d love to go back to Africa. It was a wonderful trip. There’s so much written in books about Africa and the stories around the campfire. Many hunting opportunities, wide variety of animals, and such a different hunt than a Western hunt, or Alaskan hunt. (UPDATE: Doug has since traveled to Africa on a conservation management hunt, where his restored 1886 played a key role) Besides that, I might go on a white tail hunt in Kansas this year, and in 2020 I have a grizzly hunt planned. 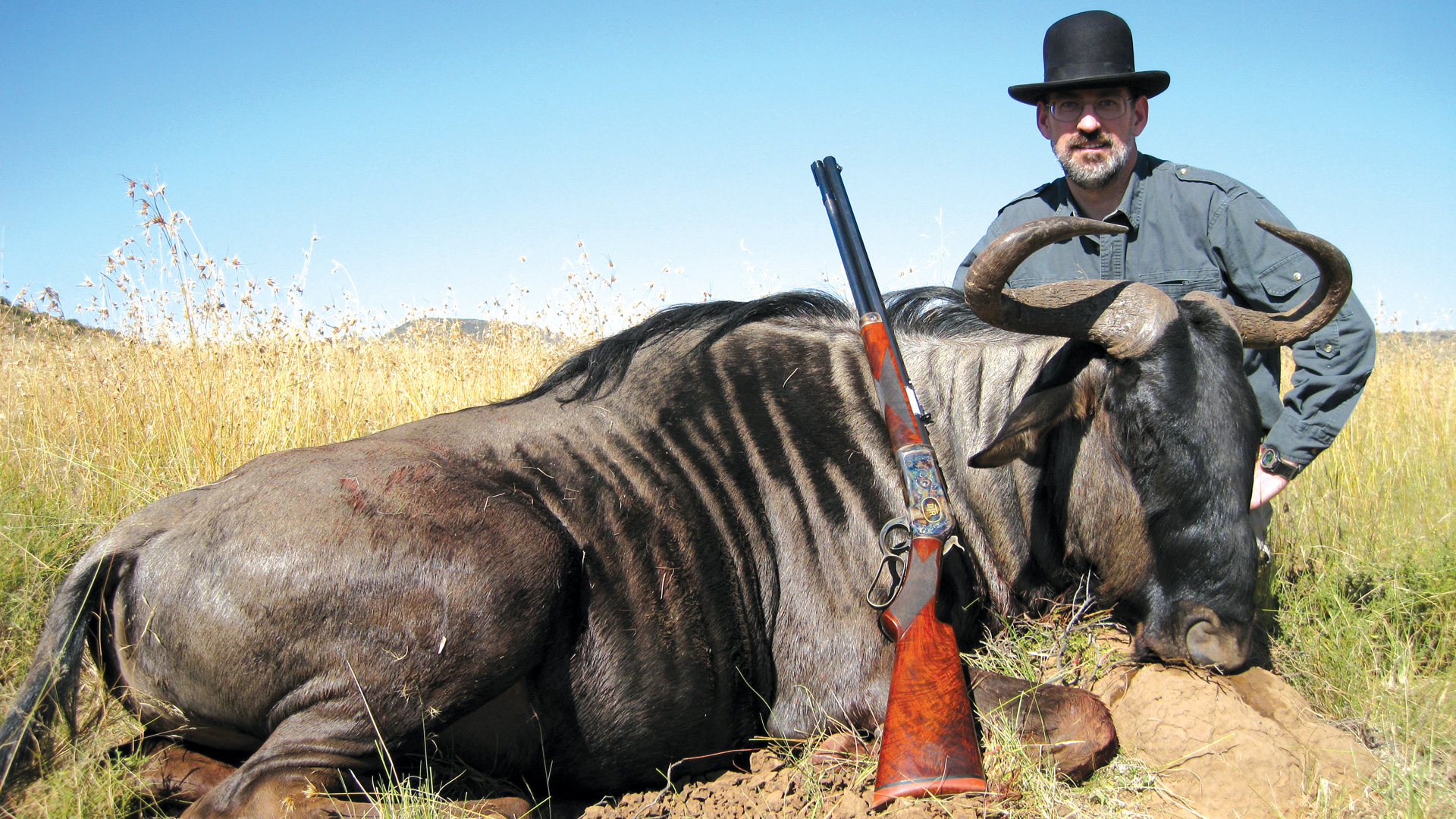