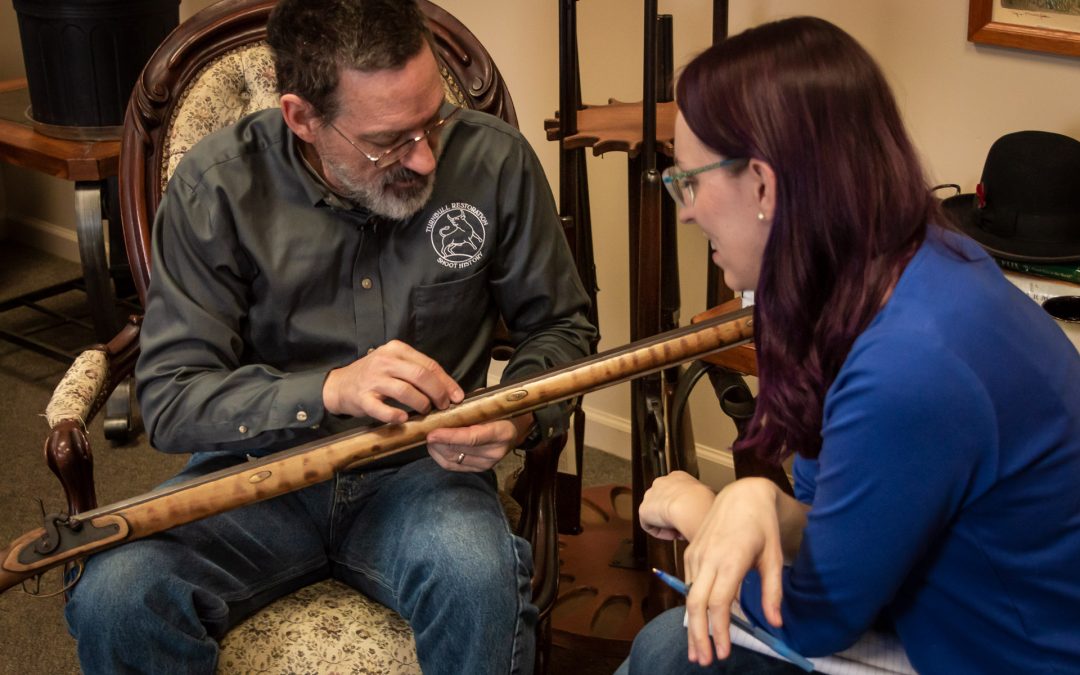 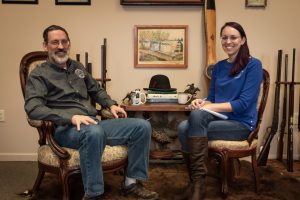 I started working at Turnbull Restoration about a year ago, but of course I’ve been part of the family my whole life. Doug is my father, and over the years I’ve overheard and half-listened to dozens of stories about his childhood, his family, the hunts he went on, and the experiences he had growing his business. The stories really began to accumulate when I started working here, and I felt like I wanted to find a way to get them down on paper and share them with people who I knew would also be interested in them. Thus the idea for our blog interview series was born!

Today’s story is a timely one, about a Christmas when little Doug didn’t exactly get what he wished for from Santa.

You’ve told me a story before about one Christmas you really wanted a certain gun?
Yeah, it was a long, long time ago. I was probably 12 or so. And one of the things that I really, really wanted was a Savage 340 in .222: An old bolt-action rifle. I knew it was kind of a low-end budget rifle; it wasn’t like I was asking for a Remington 700 or a Winchester Model 70 or some high-dollar rifle. It was just a simple gun. I had made comments, you know, like “That’s really what I want!” just to be sure they knew.

So Christmas morning comes, and there’s this box, right in the corner next to the fireplace. A long, tall box. I’m like, “Whoa! Oh my gosh! I’m gonna get this! I’m actually gonna get my Savage 340!” I started unwrapping it and I opened it up and I went, “Oh. It’s not a Savage 340. It’s a CVA .50 cal muzzleloader… kit.” It wasn’t even something I could just take out, fill full of powder, throw a cap on it and shoot; I had to put it together. So I was a little disappointed, but then I thought, “Oh. Well this is still cool! I can take this and spend some time putting it together.”

So after all the Christmas presents were opened up, I took the box and went out to the shop. The shop was right out in front of the house, about 50 yards away. I sat down at Dick Collins’ workbench and started working on it. I had everything spread out and figured out what all the parts were and where they went. The first thing I had to do was start inletting the lock plate, trigger guard, and parts, so I got some scrapers and tools that I had seen Dick use over the years. I got working on it and finally got the lock in and the pins across to hold the barrel on.I actually burned in the “tiger stripes” with the torch kind of the way they would have back in the day to make it pretty. I drawfiled the barrel out, and did the browning on it. 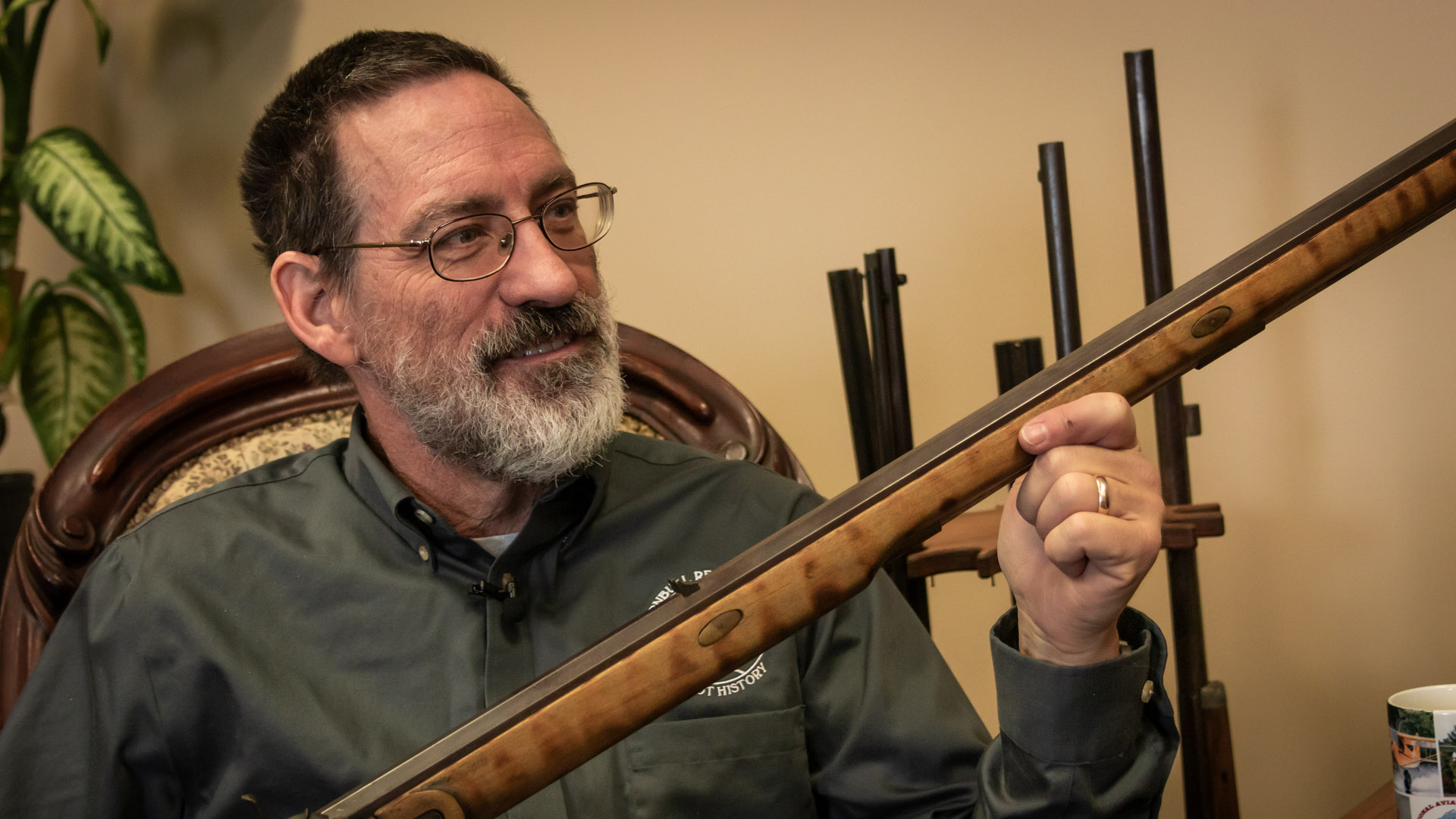 Sara to Doug: “Is that the muzzleloader there? You made that when you were 12? Wow! It’s so big!”

Is this the first time you’d done any gunsmithing before?
I would say yes. It would really be my start gunsmithing. I’d done cleaning and stuff like that but actually building something, this was probably the first time.

Did your dad or any of the other guys help you out at all, or keep an eye on you?
Yes, I got some guidance from my father as well as other guys in the shop: Paul Cowles, Dick Collins, Paul Martin. All a bunch of good, good guys that worked at my parents’ shop, Creekside, in the gunsmithing department. I could always go to those guys for answers. It’s not just seeing it, but actually doing it and being able to go back to the guys to ask for advice.

Sounds like it was a couple weeks at least before you were able to get outside and start shooting.
Oh yeah, it was probably a month or two of messing around with it. And then after I got it together it was taking it out, shooting it, and trying to figure out what loads shot well. I can remember being 12 years old standing behind the house shooting across the creek at the other bank for hours. You’d load it up and have more powder in it and it’d kick like heck, and then you’d load it down and it was just a joy to shoot. There was no recoil, but BOOM! there was a big cloud of smoke that would kind of drift off. So you’d load it again and aim about a hundred yards across the creek and BOOM! again. And hit it and BOOM! just on and on and on. 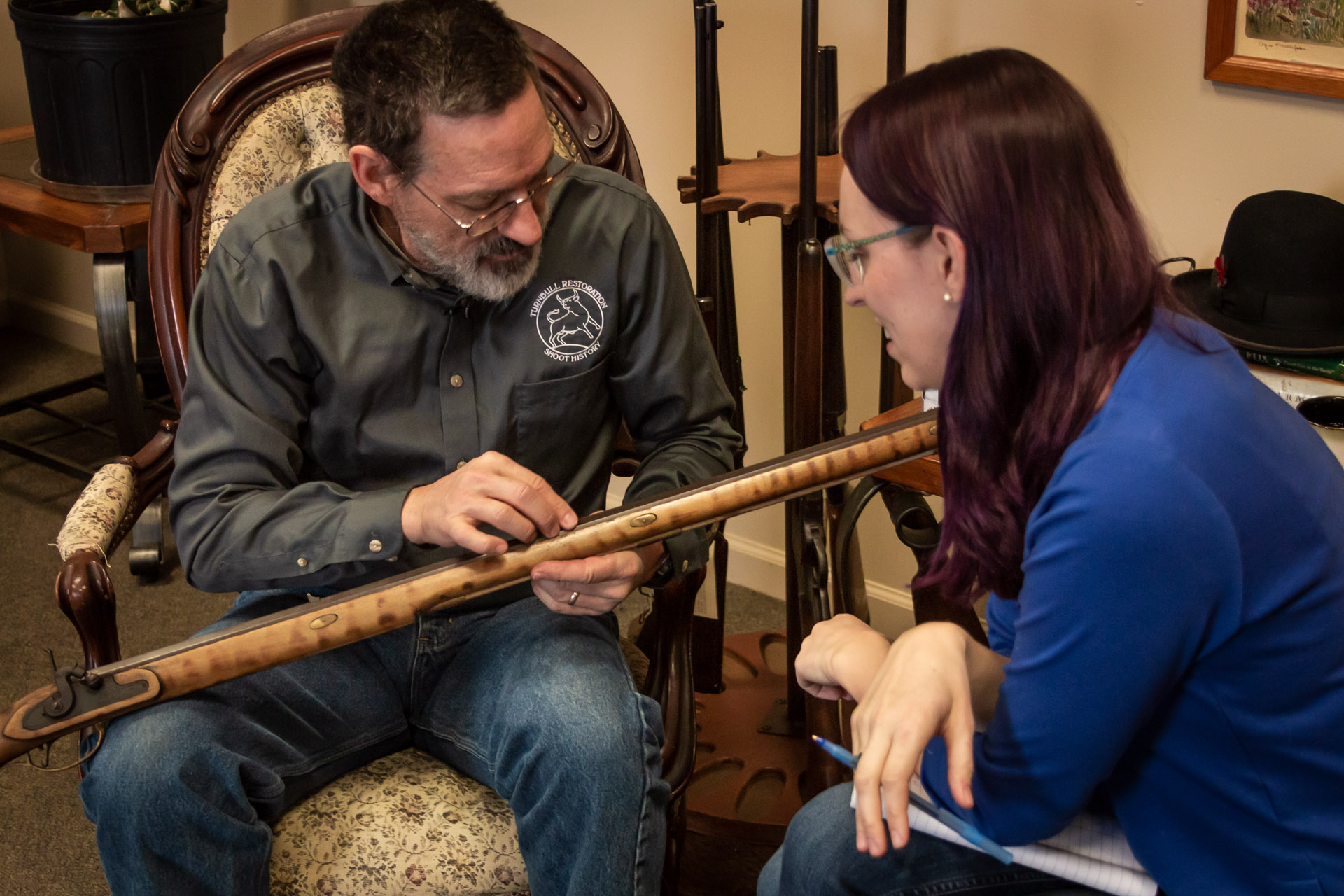 Everything a 12 year old boy wants.
Yeah, exactly. You’ve got the pride and joy of building it and going out there, making noise and hitting things, and clouds of smoke. There was a lot of “Dad, I need another pound of powder! I need some more balls!” And then you’re casting your own balls, melting the lead… It was just a lot of fun. It was a neat time. And I still have the rifle. I dug it out, cleaned it up.

You can see where I used a torch to make the tiger striping. I haven’t taken the greatest of care; it’s been sitting in the corner for probably 40 years. You can see around through here some file marks on the stock. They didn’t sand all the way out. It’s not a job like I’d do today, but it wasn’t too bad for a 12 year old. It’s kind of the start of my career building and restoring guns. Boy I shot the heck out of that thing. Woodchucks and stuff, but never shot a deer with it.

I know you had an air rifle as a kid before you got this muzzleloader. You always tell the story that you would get home from school, drop your bag at the front door, grab your gun, and run out the back door.
Yep, that was a pretty common thing. Run in the front, drop the books, grab the air rifle and a bunch of pellets, run out the back door, and come home for dinner. You almost knew what time dinner was even though you didn’t have a watch. Yeah, many, many times just hanging out in the woods or walking the creek. Mud creek was a great place to spend many hours.

Did your father ever tell you why he got you this instead of that Savage you really wanted?
No, never did. I don’t recall asking, and I’m sure the answer would have been, “Well, this’ll slow you down, son.” You know, you can just grab a box of ammo and go shoot a .222, but here you’ve gotta build something, you’ve got the experience, the pride and joy of building it and seeing how things fit together. It’s a muzzleloader, it’s a one shot gun. It takes time to load them and shoot them, and you’ve gotta clean it. I think he had an ulterior motive for doing what he did, and looking back I understand and believe that was the right choice.

Did you ever make a gun for your dad for Christmas?
I restored his old N. R. Davis, which was his father’s. An old N. R. side-by-side shotgun that he had drilled and tapped for a Weaver K8 Power scope. It was one of those shotguns that he used to start the business of Creekside; he needed some money so he sold it. Of course he always wished he hadn’t sold it after that. Then probably five years later the customer brought it back to trade it in and he was like, “I’m gonna get that back no matter what!” He had seen the four holes and knew nobody else would have done that, so he knew it was his. The fella that bought it had shot it and bulged the right barrel just ahead of the chamber, but he still had to have it.

It was probably around 1994 that I then restored it. We put a new stock on because the stock was broken, Dick Collins checkered it, I polished it up, color case hardened it, and rust blued the barrels.

It was a neat Christmas. I don’t think he knew about it. I had it in the box and gave it to him, and he started opening it up. He had his eyes closed and he was opening it up, just kind of feeling it, and he felt the bulge in the barrel and said, “I know what this is!” It brought tears to his eyes. It was neat.

Now both of us are crying!
But you know, it’s the memories, it’s bringing back the memories. And it was a great Christmas. 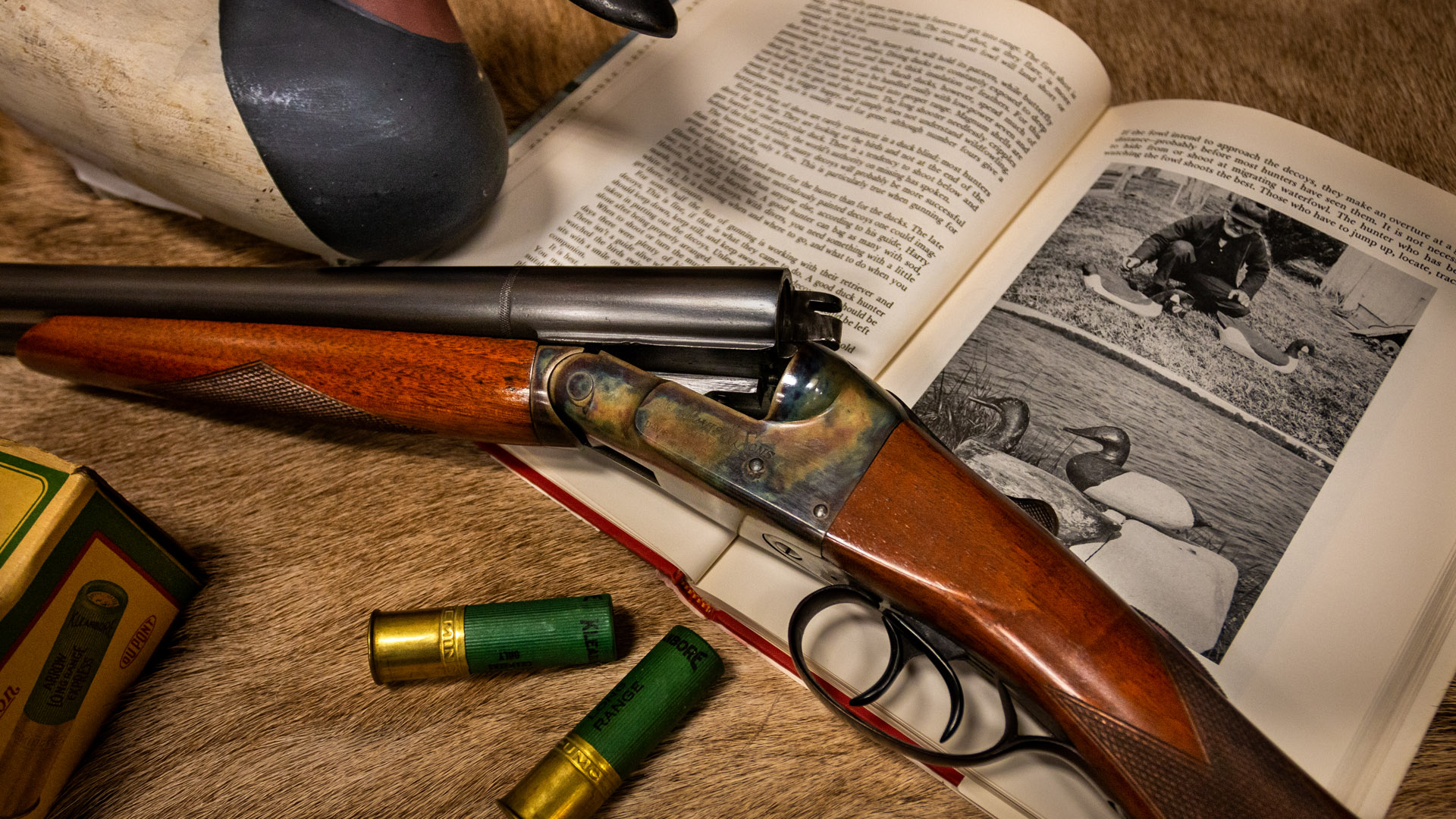 N.R. Davis 12 gauge shotgun, belonging to Doug’s father and restored by Doug in the mid 1990s