We receive many firearms for potential restoration due to damage ranging from improper storage to household fires to flooding and water damage. The process can sometimes require sensitivity in the approach to proper restoration when the firearm in question is highly embellished with engraving and inlays or has some other historic significance.

Hurricane Harvey and the Destructive Force of Water

This pair of Colt Single Action Army revolvers engraved by renowned Texas engraver, Weldon Bledsoe, were secured in a Houston area residential gun safe during Harvey and were under nearly 60 inches of flood waters for a week or more while nearby creeks, bayous and rivers recovered and drained from the massive flooding. 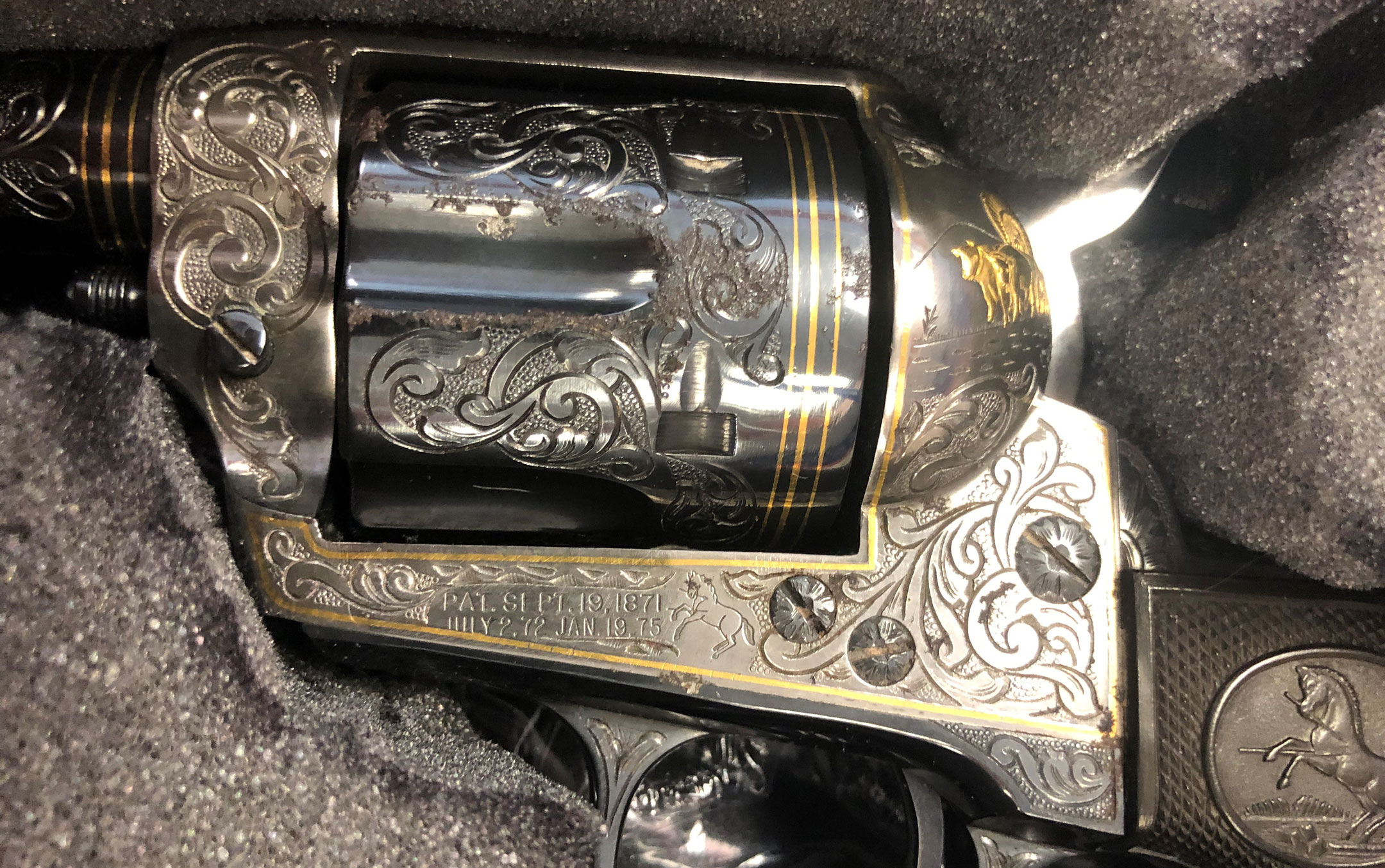 Significant corrosion and mechanical damage had occurred in the period after hurricane recovery. The revolvers were sent to us in 2019 for restoration. 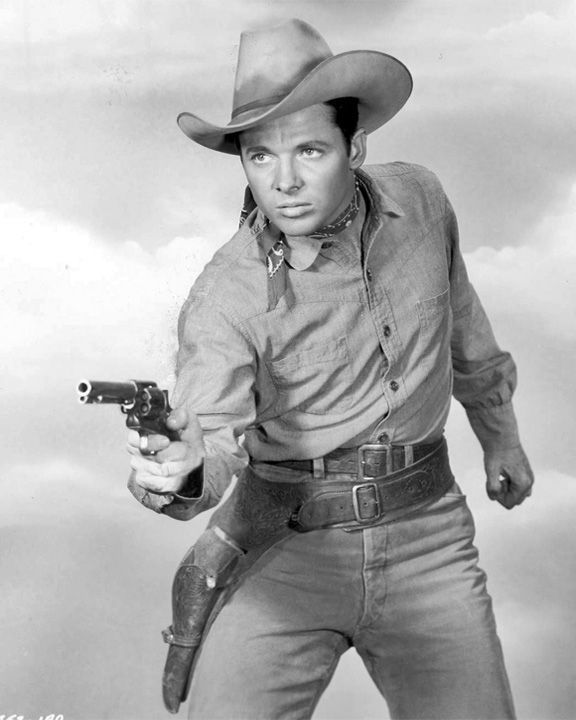 During the 1950’s, America’s burgeoning movie industry had a love affair with “The Old West”. Countless movies and television shows brought to life the romance and nostalgia of “The Cowboy” on big and small screens alike throughout our country. Stories of settlers pushing West in covered wagons and cowboys wrangling cattle on ranches, living rough on the open range and sleeping out under the stars were plentiful in this timeframe of Americana.

An integral part of these stories was the constant and reliable companion of the cowboy, the Colt Model of 1873 Single Action Army Revolver.

Weldon Bledsoe, His Common Engraving Style, and these Rare Exceptions

Weldon Bledsoe (1916-1995) was a United States Air Force B-17 “Flying Fortress” bomber pilot during World War II, and later a Texas-based engraver most commonly known for his contribution to the distinctly Texan style known as “Cattle Brand” engraving. The origin of cattle brand engraving is attributed to Cole Agee, a Fort Worth-based gun engraver. Agee is purported to have personally tutored Bledsoe in the cattle brand style. Cole Agee was believed to have engraved 15-20 cattle brand guns prior to his death in 1955. Weldon Bledsoe is attributed with engraving some 300-400 of these guns during his career. These Bledsoe Cattle Brand guns are almost always marked with his ‘2 Lazy 2 P’ brand with no other signature.

There are a few, very rare Bledsoe guns engraved in a more traditional American Scroll style of engraving, of which these two revolvers are a fine example. 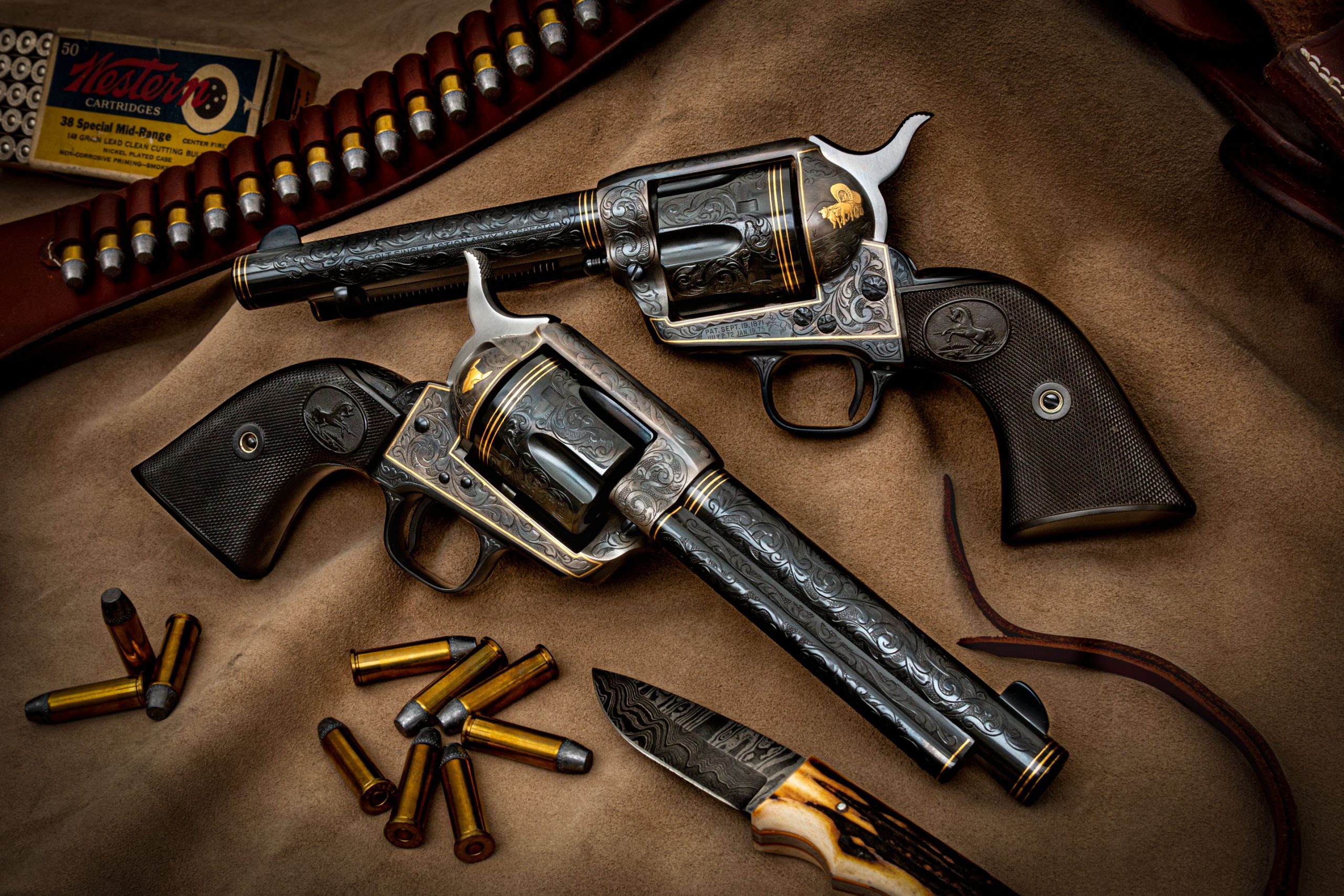 Collectors take note: this pair of Bledsoe revolvers are engraved in a more traditional American Scroll style of engraving, a rarity in comparison to the bulk of his work.

Restoration and the Challenges of Water Damage

When these guns were initially received by Turnbull Restoration, the actions were seized and completely inoperable. Significant corrosion and active rust deposits were found on all surfaces. The metal parts were treated for corrosion mitigation on multiple occasions to ensure that the corrosion process was stopped fully and that it would not return.

Because the rust pitting and corrosion damage was so extensive, the decision was made to emphasize the preservation of the original style and handiwork of the Bledsoe engraving. Removing all remnants of the pitting would have removed too much of the original Bledsoe hand-cut engraving and changed the inherent character of Bledsoe’s hammer and chisel artwork. Thus, it was a fine balance of removing as much flood damage as possible while preserving the character of this rare Weldon Bledsoe expression. 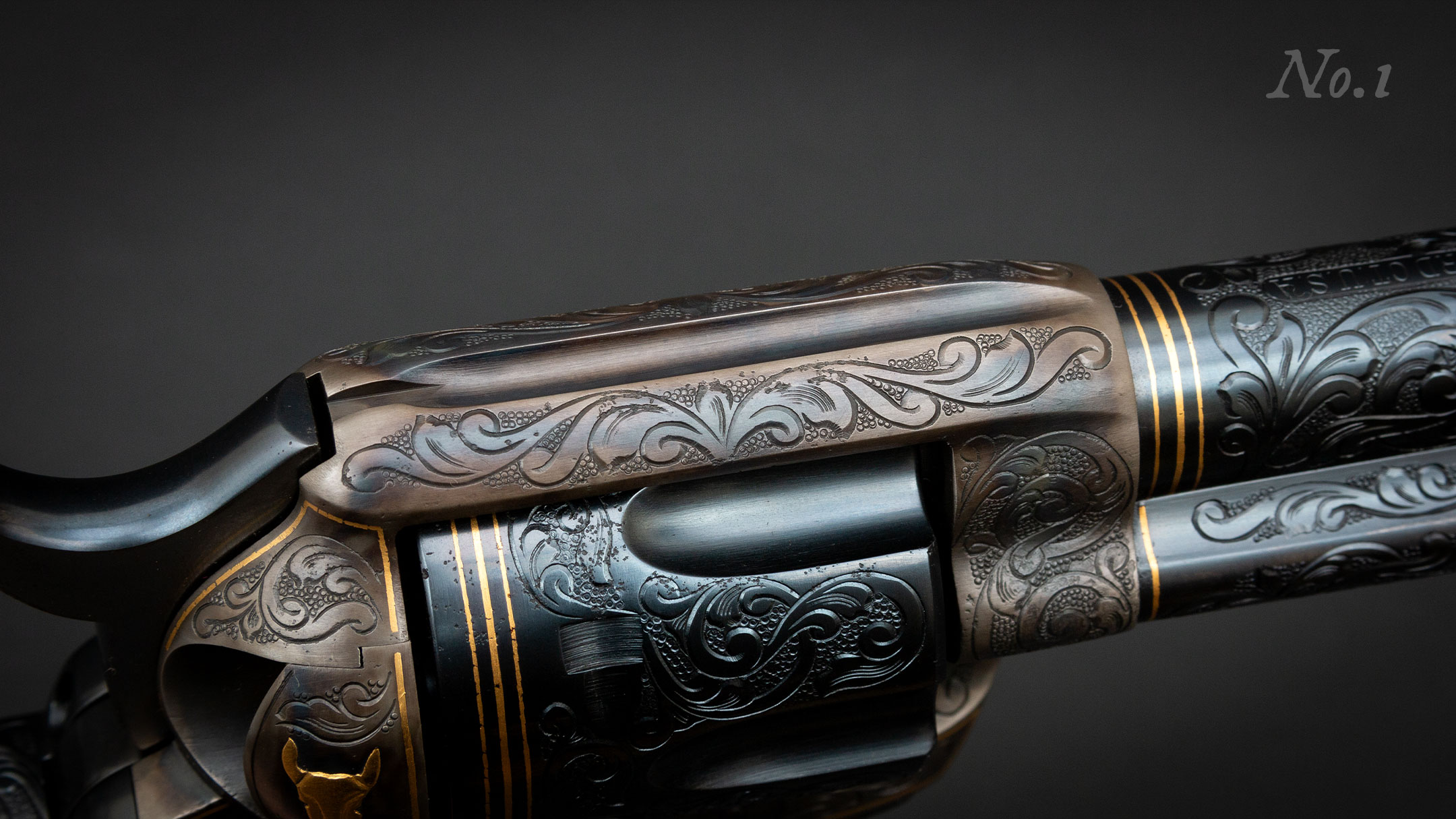 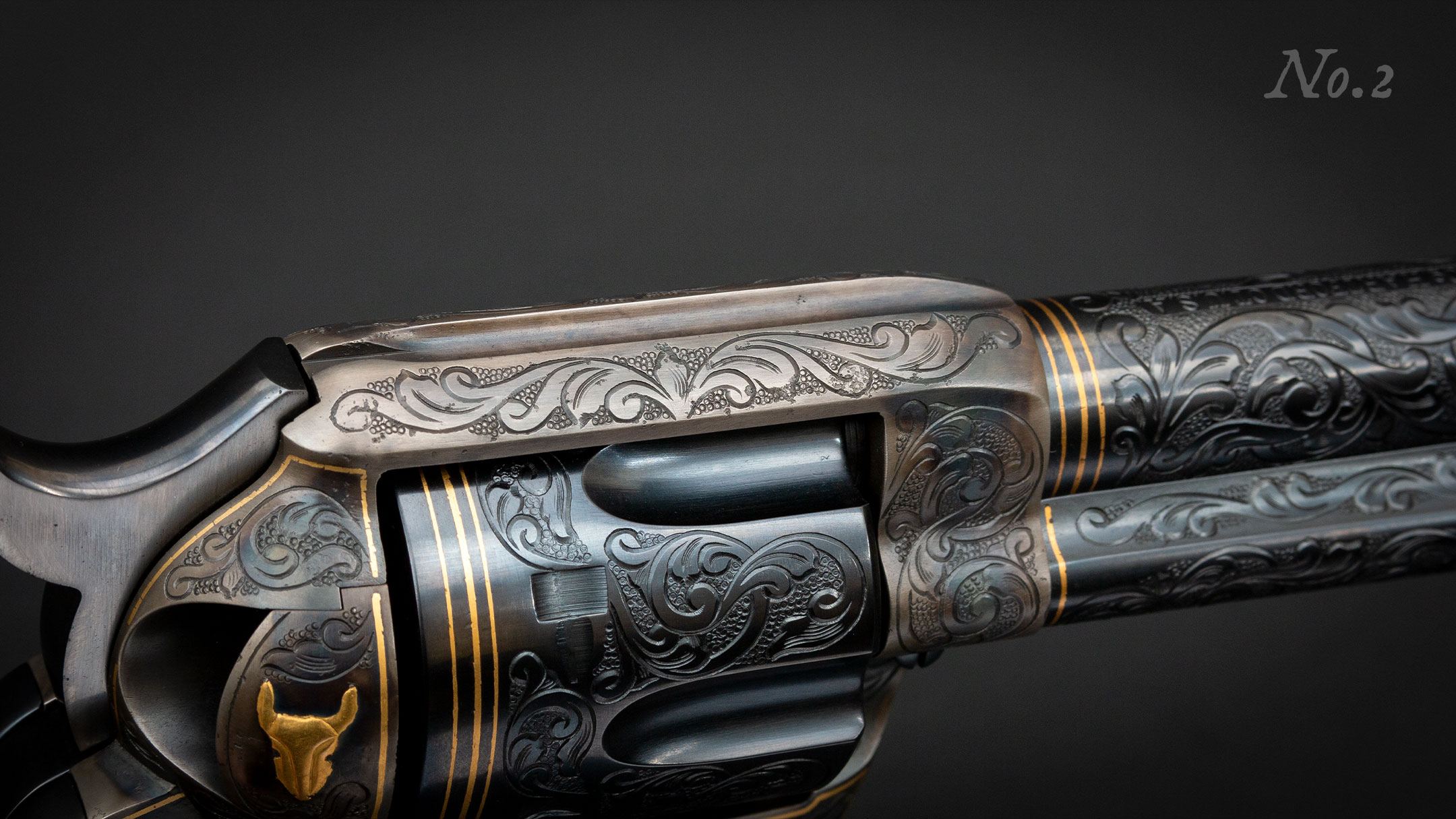 We took great care to preserve the character of this rare Weldon Bledsoe engraving. Therefore, some remnants of pitting remain on both revolvers in the pair (see additional photos in the gallery above). Determining how a classic firearm is to be restored is just as important as deciding if the gun should be restored at all.

Here Bledsoe pays subtle homage to two iconic images of the American West with raised gold-inlaid covered wagons used by settlers travelling west and a similarly raised gold steers head symbolizing the cattle industry and the cowboy. The remainder of these guns are engraved with full-coverage American scroll with copious gold-wire inlay.

The guns are finished with lightly French greyed frame and gate with the barrel, cylinder and grip frame blued as original. The subtle elegance of the French grayed case color finish highlights the frame’s raised gold elements and gold wire, while the blued cylinder and barrel beautifully contrast the gold inlay with the classic American scroll.

These guns are two examples of rarely-signed engraving by Weldon Bledsoe, which is seen just below the loading gate on both revolvers. These guns are also noted as ‘No.1’ & ‘No.2’ on the butt of each matching revolver. The serial numbers of this Colt pair are sequential and manufactured in 1957.

Included with this listing is a Colt-branded display case with French-fit interior. 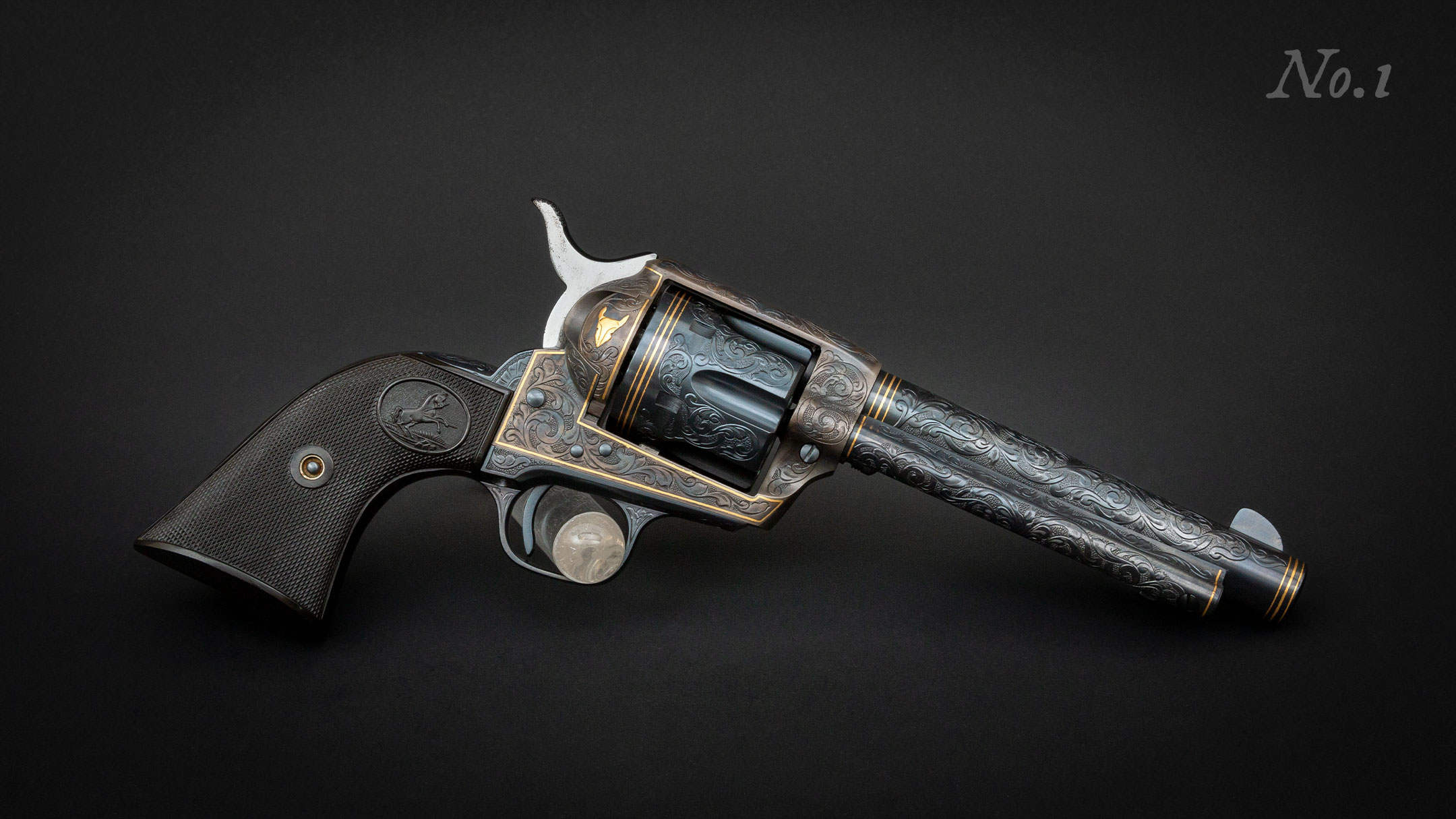 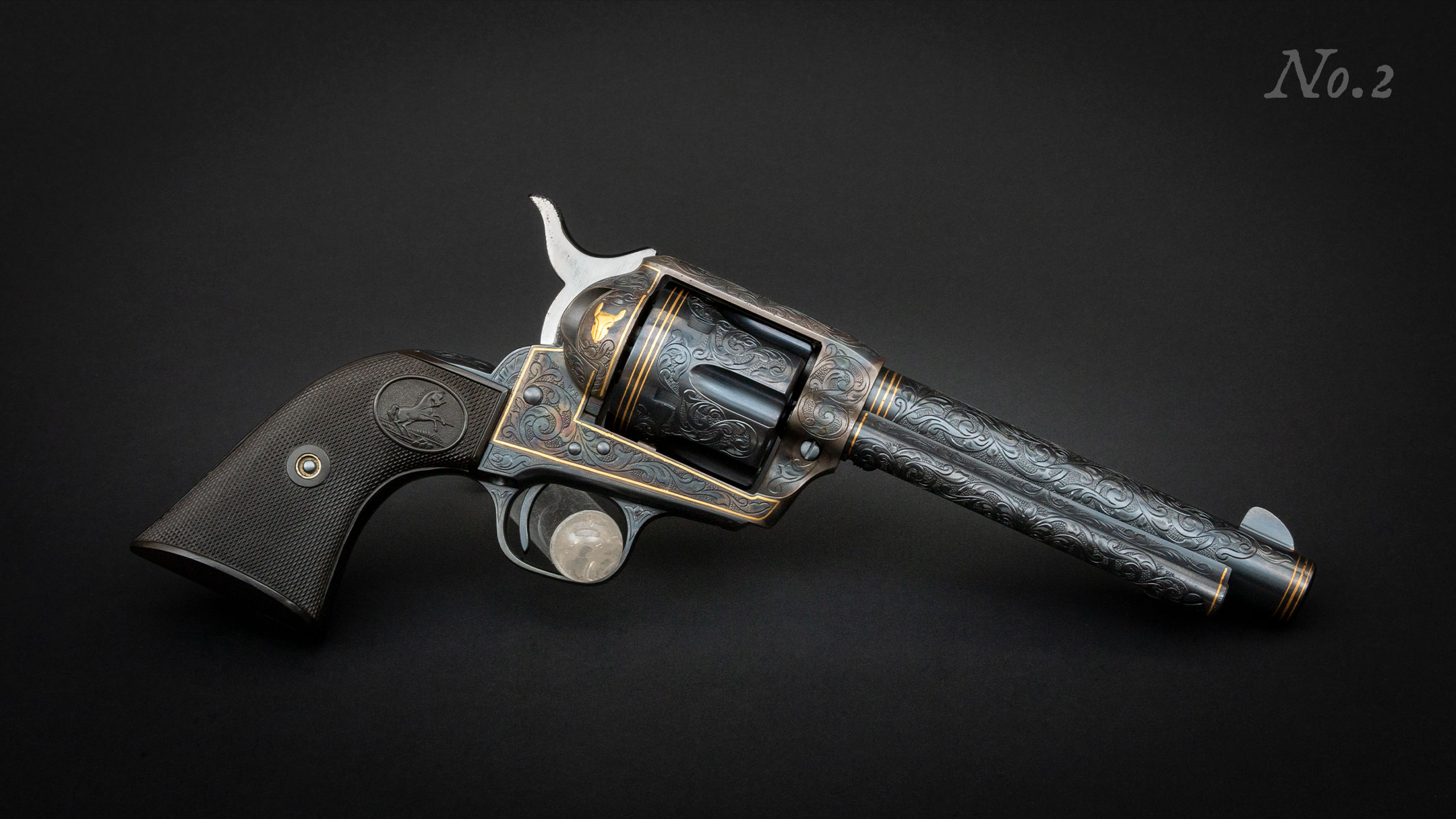 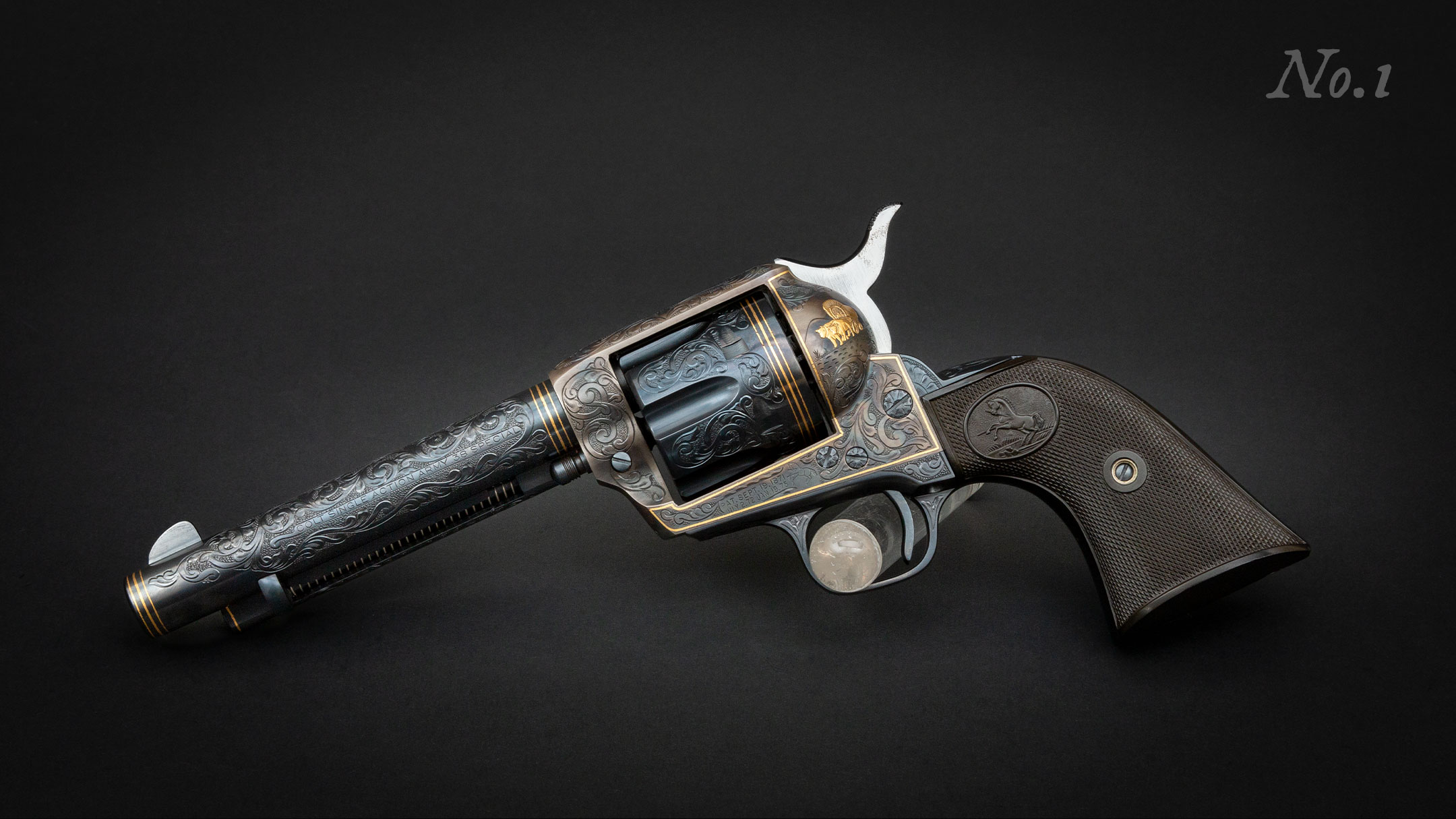 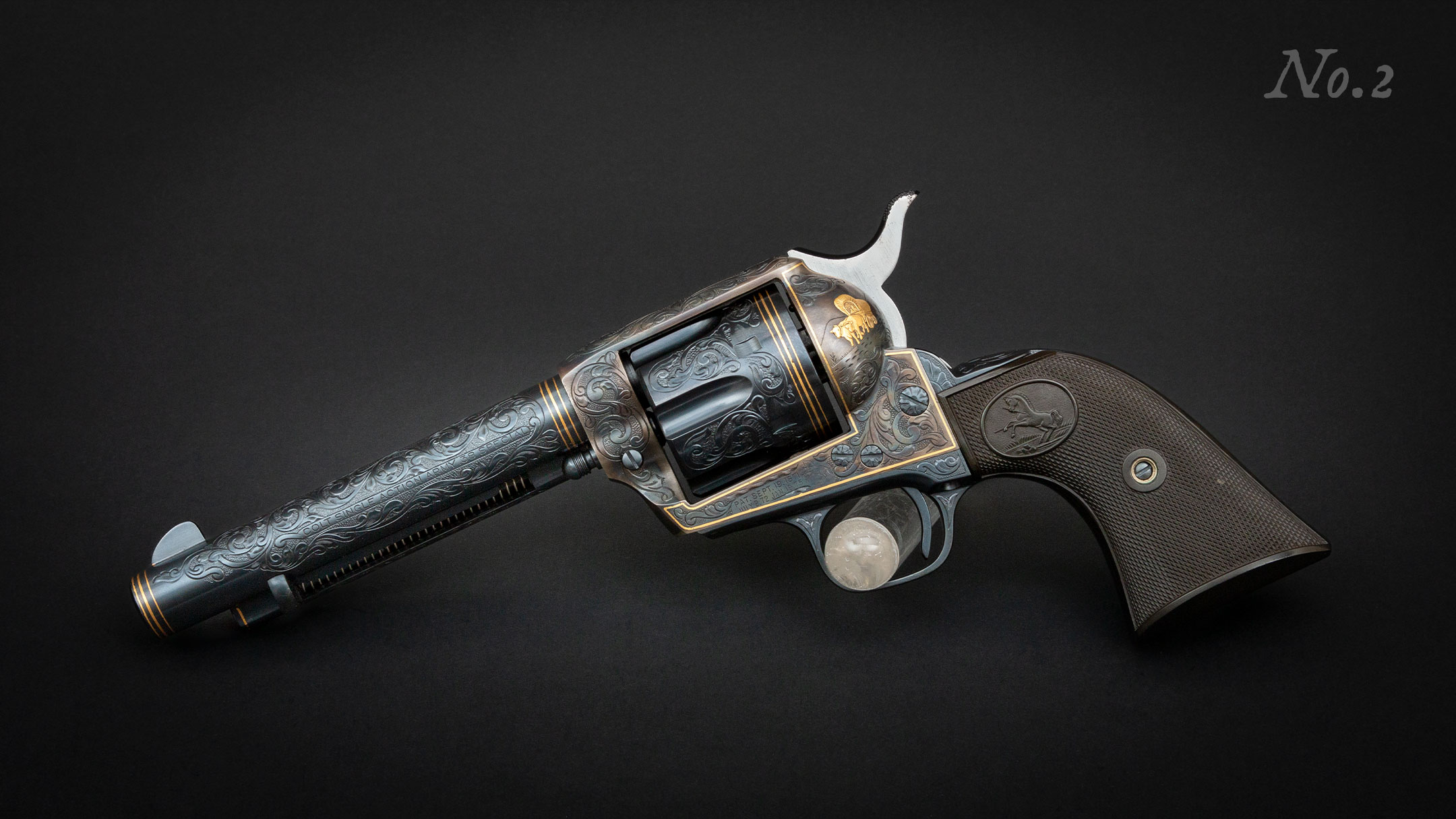 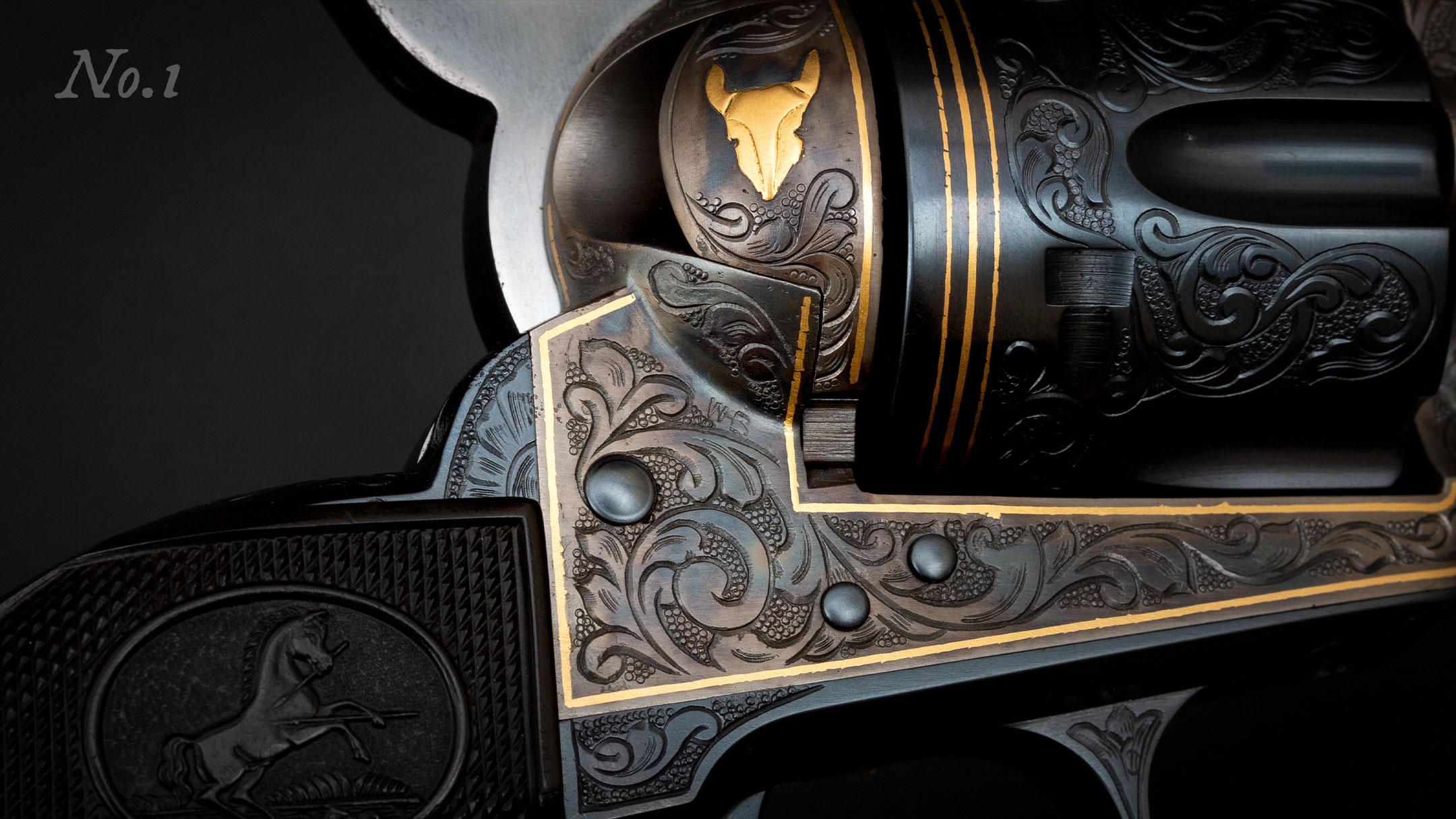 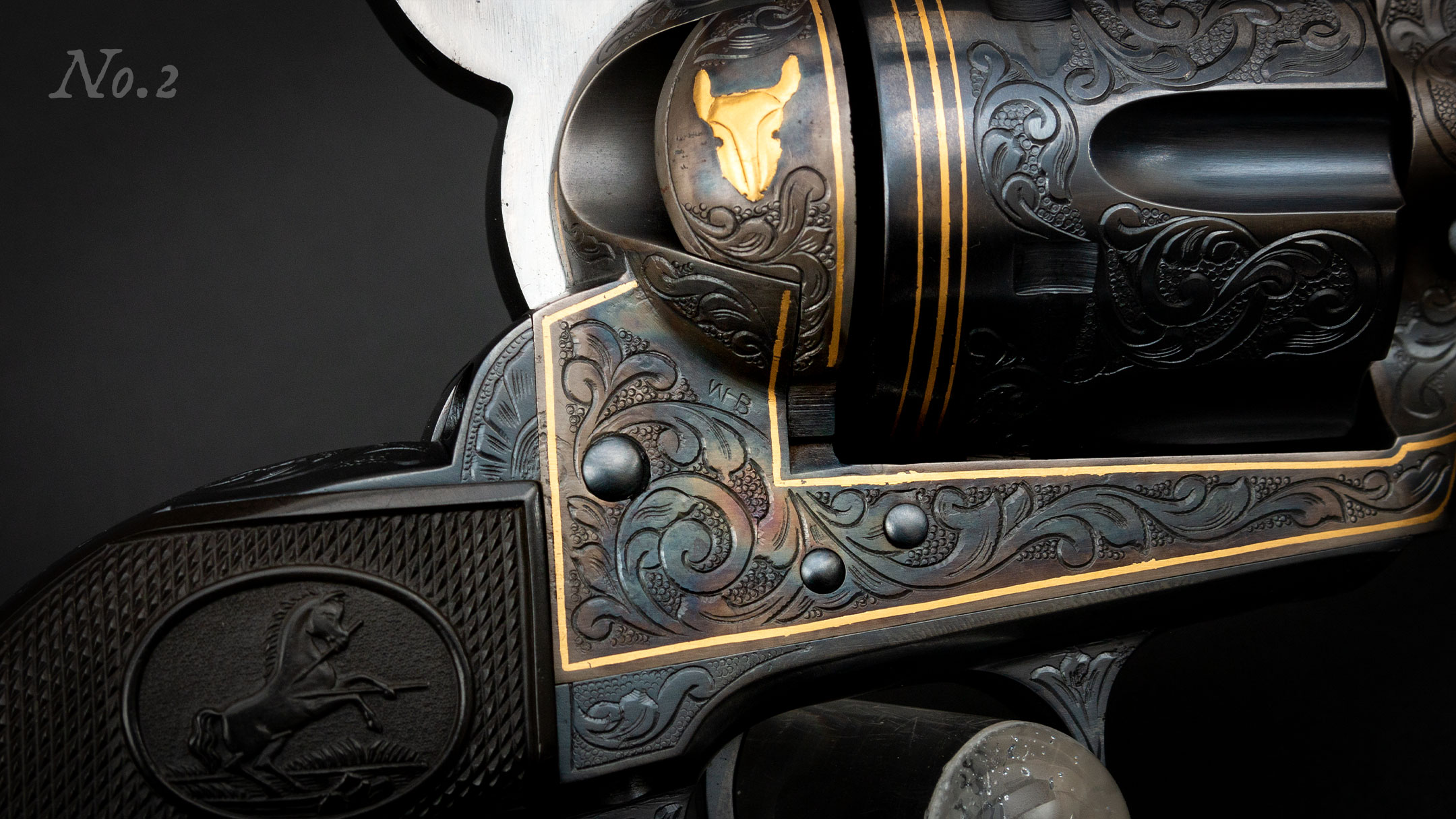 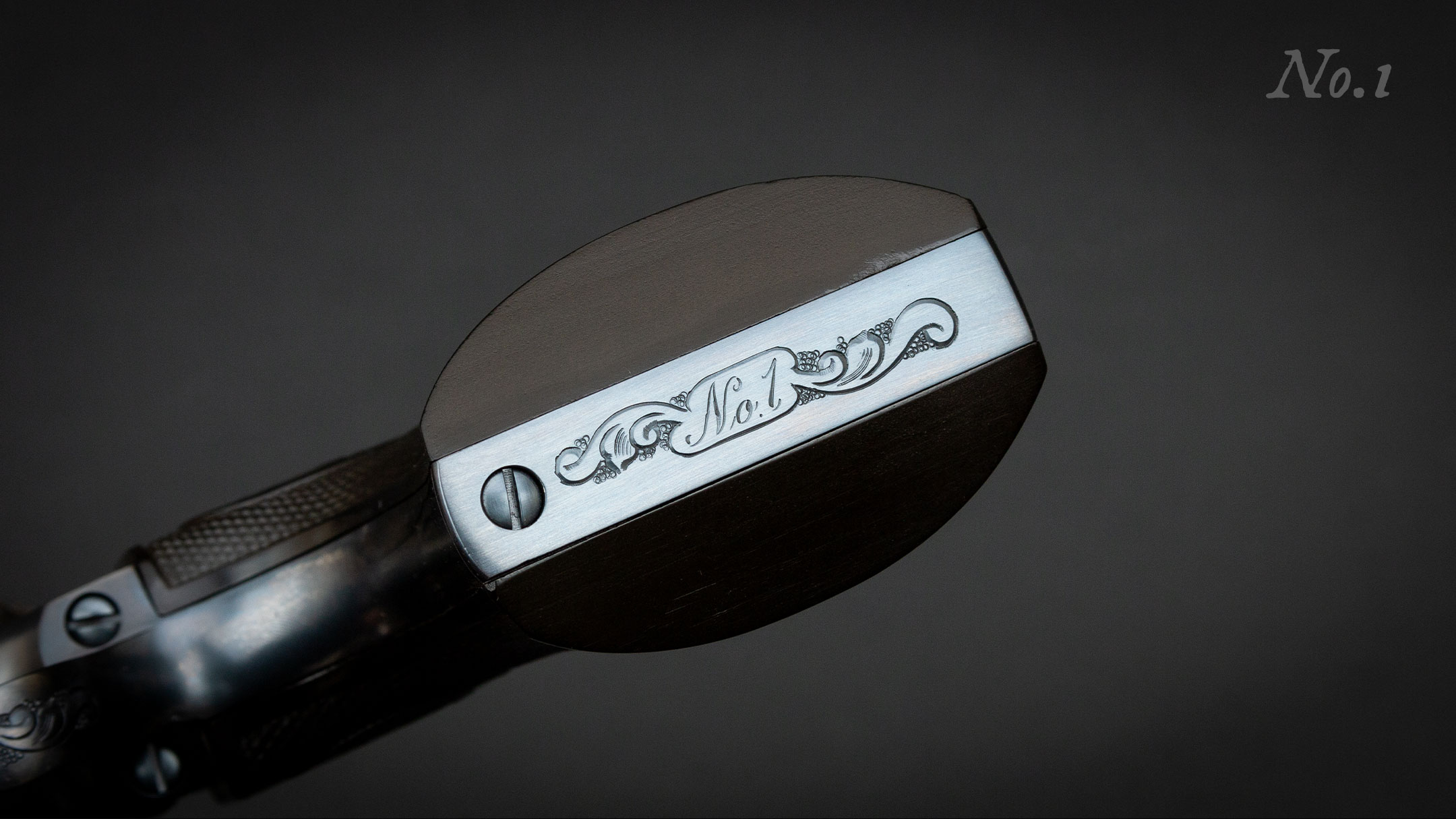 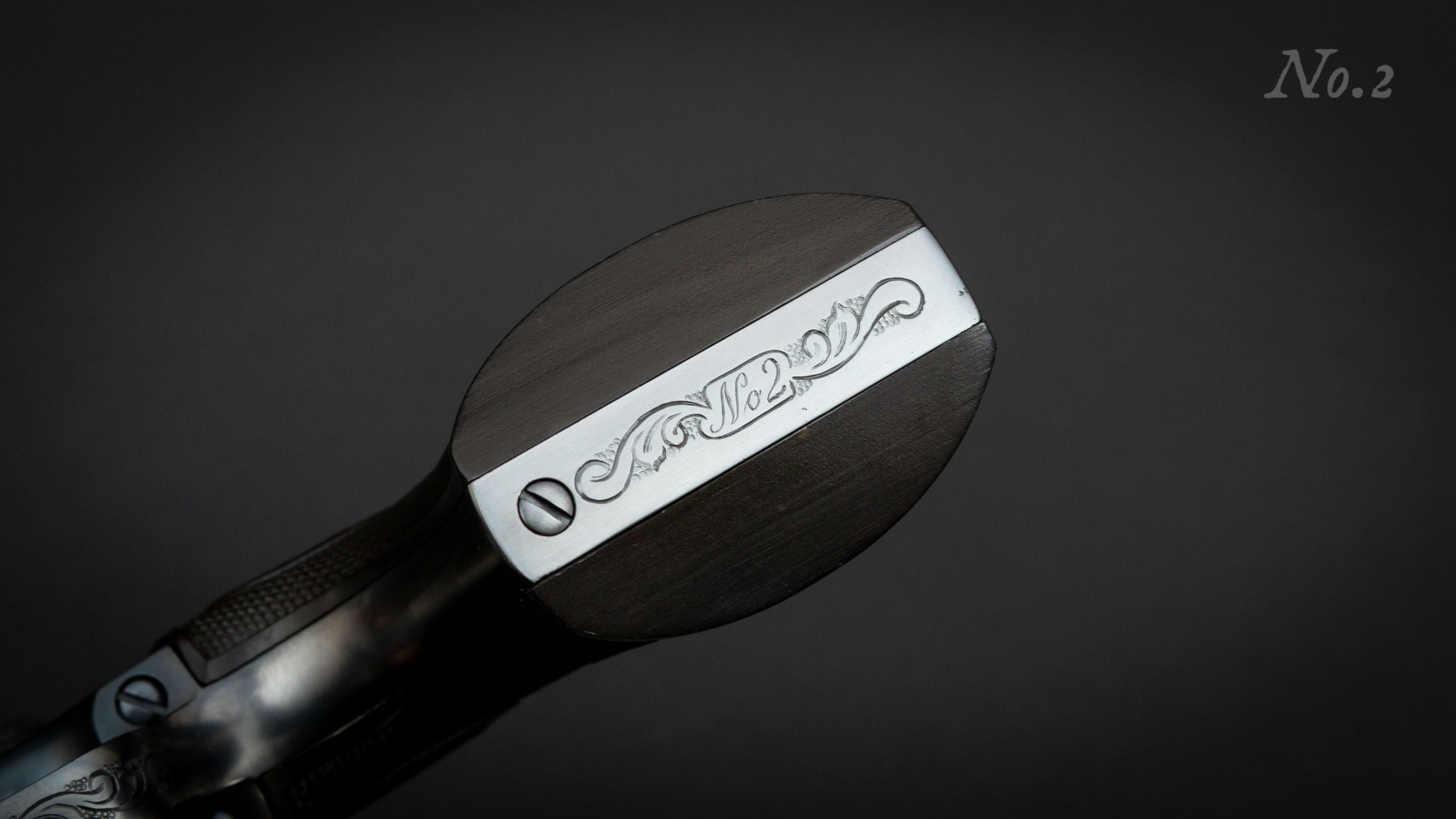 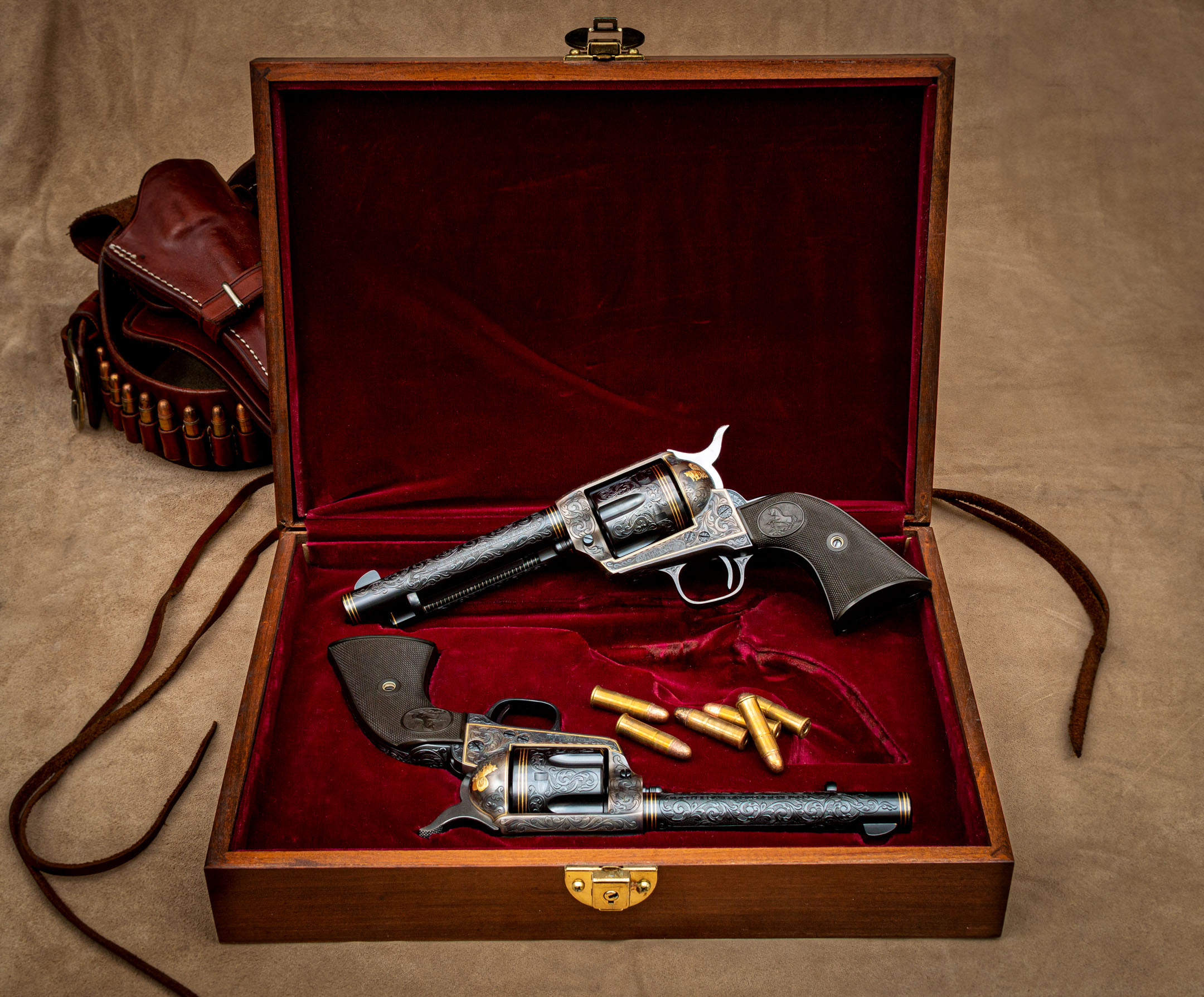 For the Weldon Bledsoe collector or anyone interested in a distinctive bit of Texas history, this pair is a once-in-a-lifetime opportunity to add a unique pair of matching guns to their collection.

To Order Or For More Information