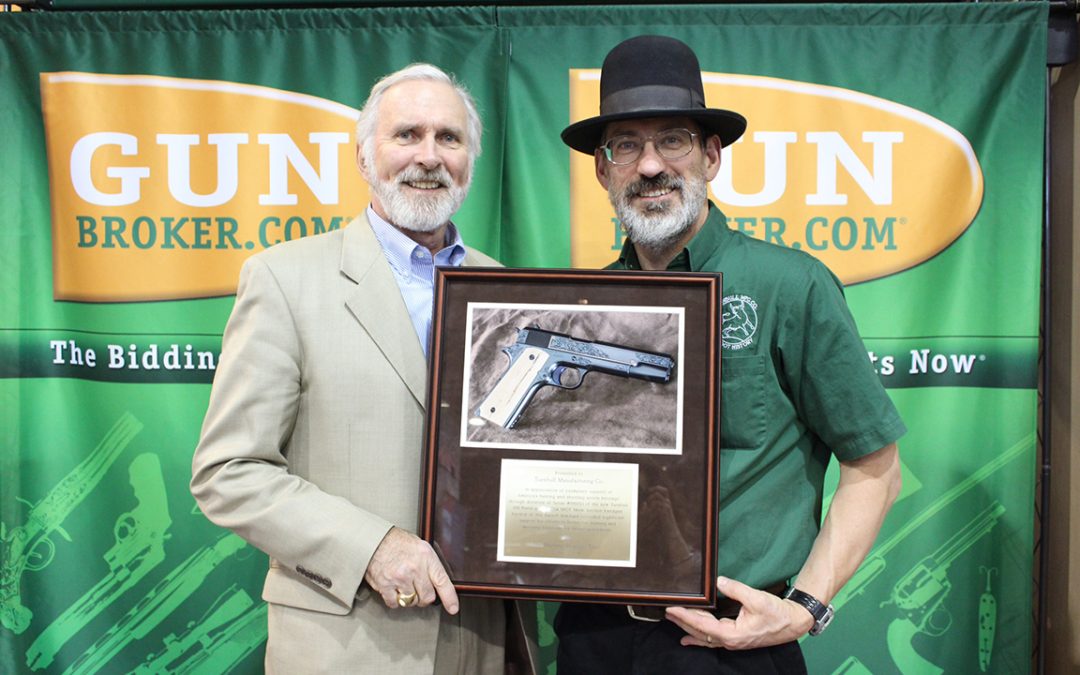 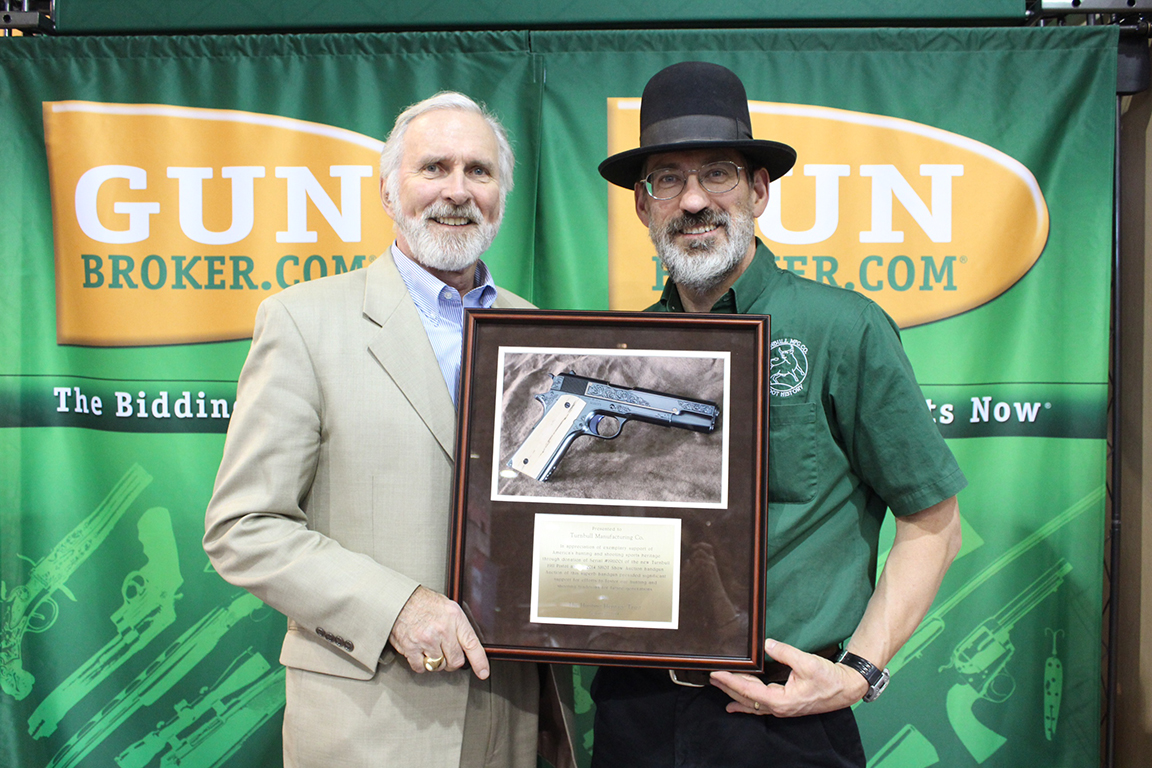 Doug Turnbull, founder and CEO of Turnbull Manufacturing has announced that the first Deluxe Model 1911 Classic pistol – serial number 1911001 – raised over $36,000 at the 2014 SHOT Show auction to raise finds for the all important Hunting Heritage Trust. Working with Bob Delfay from the trust for the second year, the Turnbull pistol was selected as the 2014 SHOT Show Auction handgun. This is the second year that Turnbull has been a large part of the Auction.

In 2013, the Auction featured the first production model of the very popular TAR-10 rifle, which is a highly detailed and inlayed rifle built on the AR platform. That gun raised $136,024, yielding a 2 year Auction total of over $172,000 for the Trust, which supports and promotes the American traditions of hunting and the shooting sports.

“We at Turnbull could not be prouder of the funds our guns raised and our continuing work with Bob Delfay to further the Trust’s activities,” said CEO and founder Doug Turnbull. “Bob’s work is essential to the promotion and protection of our heritage and we are beyond happy to be part of his work.”

The Turnbull Classic 1911 is modeled on the look and feel of the 1911 pistol as it was manufactured in 1918, which is the classic look that all 1911 shooters feel is the essence of the pistol. The Classic is manufactured using Turnbull’s unique combination of modern materials and safety features and methods that were used when the 1911 was first in production in the last century.

The model auctioned off at the 36th annual SHOT Show was custom engraved for the Auction featuring scroll engraving and gold inlay. Serial number 1911001 (1911, number 001) indicates that this is the first Turnbull 1911 Classic production model to be completed. 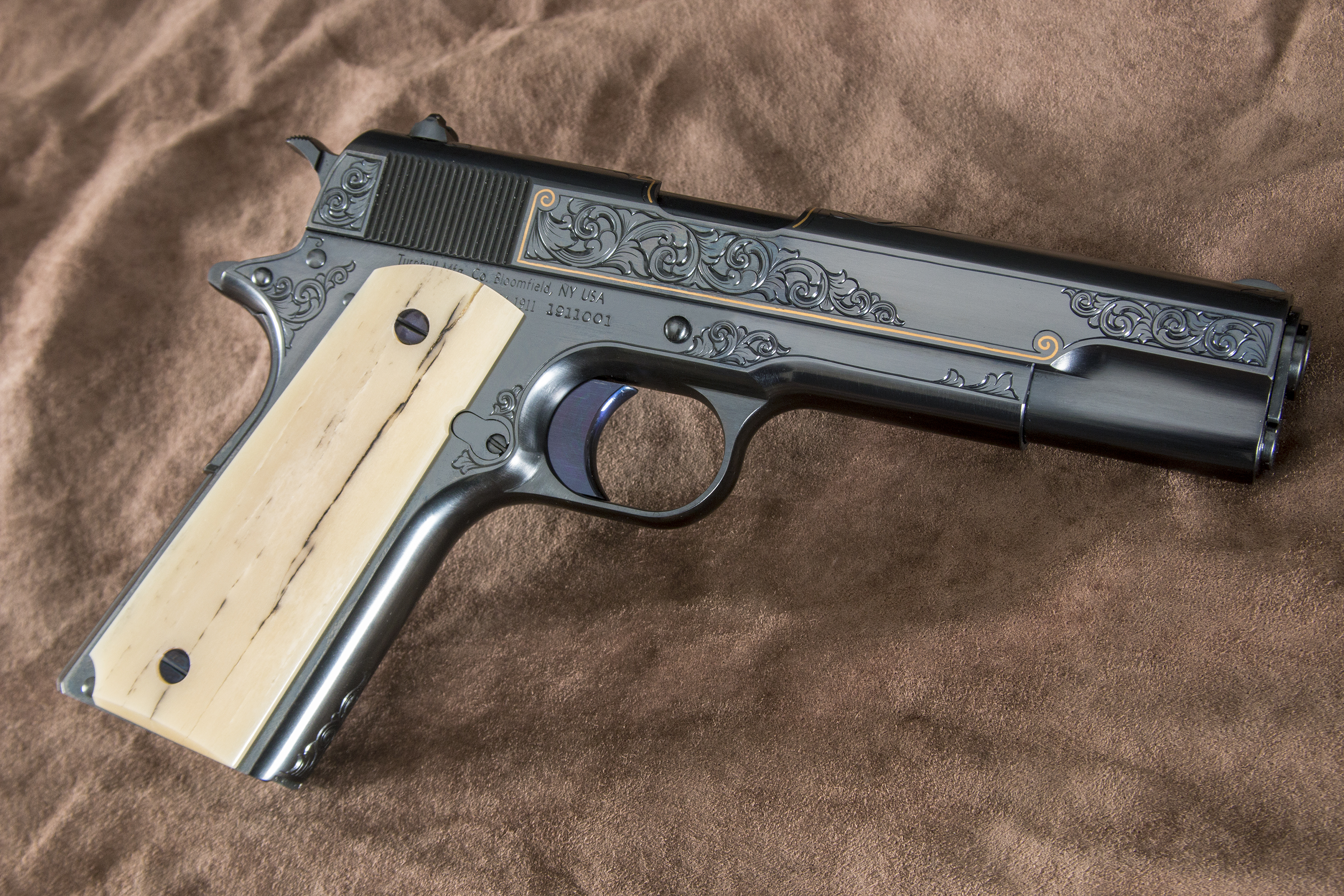 Turnbull is known globally for the ability to take even the most damaged collectible gun and return it to its original look, feel and function. They also have new production firearms that incorporate the same quality look and feel as the collectibles they are famous for restoring.

The Hunting Heritage Trust presented Doug Turnbull with a photo and plaque recognizing Turnbull’s contribution to both the trust and the shooting sports. Bob Delfay, President of the Trust, said, “Doug Turnbull and Turnbull Manufacturing have provided exemplary support for America’s hunting and shooting sports heritage through donation of two of their superb firearms to the SHOT Show Auction program. Auction of these highly desirable Turnbull firearms have provided outstanding support for efforts to foster our hunting and shooting traditions for future generations.”

“We at Turnbull are appreciative of the recognition and thrilled that our guns were able to support Bob and the Hunting Heritage Trust,” responded Turnbull. “If you had told me just 10 years ago that I would be receiving an honor from Bob and the Trust I would have probably laughed. Today, I am deeply honored on behalf of all of us at Turnbull to have been able to lend a hand and for the recognition.”

The SHOT Show Auction is administered by the Hunting Heritage Trust for the National Shooting Sports Foundation (NSSF). All proceeds from the auction will benefit programs to further America’s hunting and shooting sports heritage. NSSF has long stood as the American firearms industry’s trade association. While SHOT Show is the most visible and best known of NSSF’s functions, the organization is active year round promoting and defending the hunting and shooting sports. Please visit www.nssf.org for more on both the organization and the Hunting Heritage Trust.2014Auction

Entering their 4th decade, Turnbull Manufacturing has maintained a strong commitment to building firearms the way they used to be built. Founder and CEO Doug Turnbull is best known for his mottled color case hardening which stands out as the most striking and unique. Turnbull offers other reproductions as well as a full array of the finest and most respected restoration services in the shooting trade. Please visit us at www.turnbullmfg.com for more information.