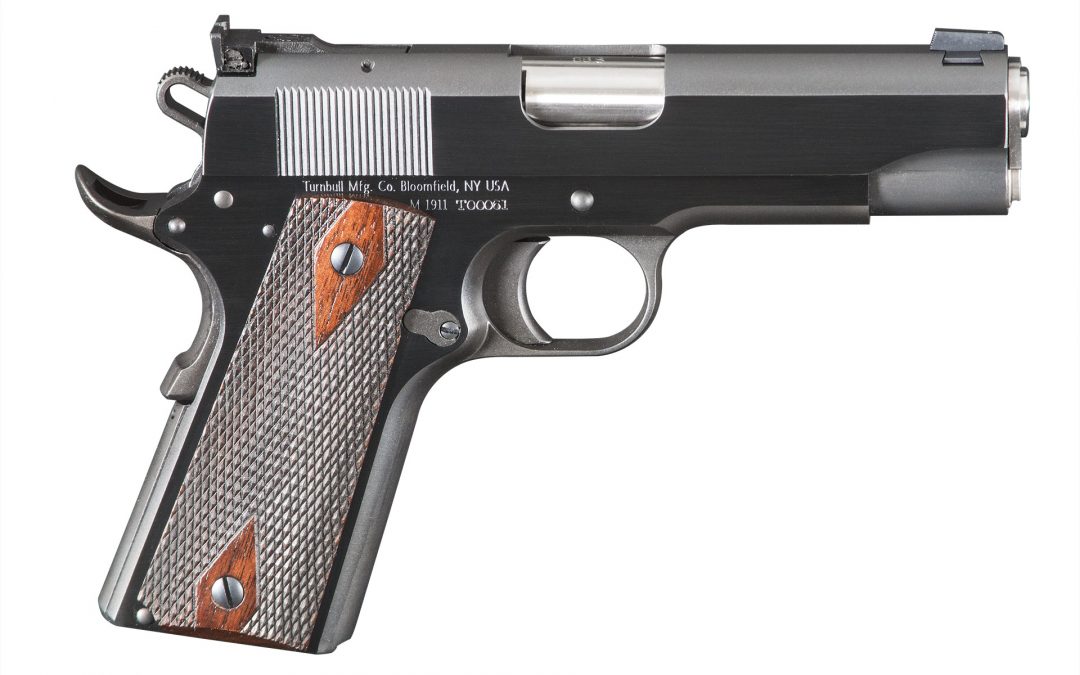 Turnbull Manufacturing today is proud to announce a very limited run of a redesigned and updated custom 1911 Commander type pistol, designed for the Trop Gun Shop. The pistol is based on the classic early 20th century appearance of the 1911 pistol, if there were a Commander size slide and frame in production at the time.

“Our collaboration with Trop last year was very successful and produced an amazing pistol,” said CEO Doug Turnbull when asked about the frame design, “so it was only natural to create an updated and redesigned pistol with them for 2014. The Commander remains the all time favorite version of Browning’s masterpiece. We took the earlier design and simply made it even better.”

The pistol has a stainless steel 4.25 inch barrel and bushing with a carbon steel frame, slide, trigger, hammer and grip safety. The pistol features Eliason style rear sights. The new Commander will only be available in .38 Super with a 7+1 capacity in a traditional single stack magazine. All components are manufactured in the USA.

The frame has the deep, lustrous charcoal blue finish that 1911 shooters look for as a mark of quality. The slide, trigger and hammer are also blued via the original charcoal style. The trigger is carved from a single piece of steel for stability. The grips on this work of shooting art American Black Walnut with double diamond pattern hand checkering.

Other features of this instant classic pistol include a beavertail grip safety designed with the same look as the original, but using the most modern techn0logy, a Commander style hammer and the Doug Turnbull inspector stamp that marks the pistol as a work of gunsmithing art. Each one of these new Commanders comes with a pair of 2-tone magazines.

The Turnbull Commander has a retail price of $2,599 and there will only be limited production. They are exclusively available through Trop Gun Shop in Elizabethtown, PA.

“As we started to plan for 2014, the good folks at Trop suggested we repeat our success,” noted Turnbull of the collaboration. “Once we began to talk, it became apparent that we were designing a new version of that pistol. The result is a gun I am proud to put my personal stamp on.”

The Turnbull Commander is a brand new design that incorporates classic designs, a combination of both traditional and modern materials and methods to bring historic looks alive with modern reliability and accuracy. It is this seamless combination of the old and new that sets Turnbull apart.

Turnbull is known globally for the ability to take even the most damaged collectible gun and return it to its original look, feel and function. They also have new production firearms that incorporate the same quality look and feel as the collectibles they are famous for restoring.

Entering their 4th decade, Turnbull Manufacturing has maintained a strong commitment to building firearms the way they used to be built. Founder and CEO Doug Turnbull is best known for his mottled color case hardening which stands out as the most striking and unique. Turnbull offers other reproductions as well as a full array of the finest and most respected restoration services in the shooting trade. Please visit us at https://www.turnbullrestoration.com/for more information.