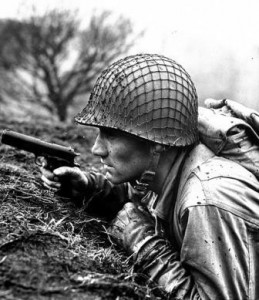 At Turnbull Restoration and Manufacturing Co., our services center around both the manufacturing and restoration of guns. One of the foremost handguns that our manufacturing efforts focus on is the Colt 1911. These guns are still popular today due to their fine craftsmanship and amazing quality. The restoration that we do on these handguns is aimed (no pun intended) at maintaining historical accuracy while improving the quality with our unique manufacturing process. The following will provide an in-depth look at the history of the colt 1911, as well as how Turnbull has modernized the classic.

As the name of the gun implies, the Colt 1911 was first crafted in 1911. This pistol was designed by John Moses Browning. However, its history began around the year of 1906. During this time, the United States military started to look at a wide range of possible pistol designs, which included the new .45 Automatic Colt Pistol. Over the next few years, the number of designs was whittled down until the Colt pistol remained as the last one standing.

When John Browning developed this pistol for military tests, it consisted of both grip and manual safeties. The reliability and simplicity in his initial design far outshone the others that the military had at their disposal. When the pistol went through the initial test, it fired a total of 6,000 rounds over two days without a single malfunction. The pistol design was also equipped with a lanyard loop in 1910. It came to be known as the Colt 1911 due to its adoption by the military on March 19th of that year. While the Army was the first to adopt the weapon as the standard sidearm for soldiers, the Navy and Marine Corps both followed suit by 1913.

The pistol was a favorite of American soldiers in WWI, as it was exceedingly powerful at close range. Sergeant Alvin York used this very same model when famously stopping an offensive by German soldiers, wherein he killed six in six shots. Improvements were made to the weapon over the years, with improved sights and a better trigger added in the ’20’s. This model was the primary weapon used by the U.S. military in the next three wars that America fought in. When the wars came to an end and firearms needed longer range, the Colt 1911 was able to adapt through the Modern Technique, which added a one-hand draw, quick sight alignment and better accuracy to the current model. This has allowed the gun to remain as the standard for use in competitions.

How Turnbull Has Modernized The Classic 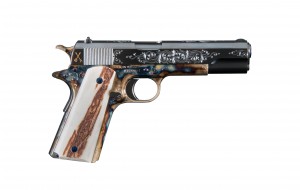 At Turnbull, we understand that the Colt 1911 is still among the best handguns available, which is why we have added some additional features during the manufacturing of the model. For instance, the Turnbull 1911s are still entirely authentic to the time period in which it was first built. We have simply implemented some modern processes in the form of its themes and styling. We utilize a color case hardening technique that allows us to add color to the gun. Every Turnbull 1911 is meticulously put together by hand as opposed to machine. This manufacturing process takes longer, but it is well worth it. Hold a Turnbull 1911 in your hand alongside another manufacturer and shake them. You’ll notice the Turnbull 1911 doesn’t rattle like the others thanks to this unique attention to detail.

Due to the storied history of the 1911 as the main gun for the U.S. military, we are committed to using only 100 percent American made parts in the construction of our models. An example of our modern styles is the BBQ gun, which includes an emblem of a crossed spatula and prongs. This is done while still retaining the age-period authenticity. Classic Colt engraving patterns are included on these handguns in order to give them more flair. Don’t forget to check back regularly, or sign up for our email list to stay up to date. We are always working on something new here at Turnbull.