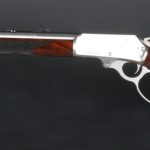 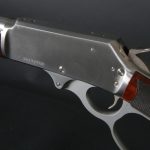 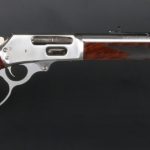 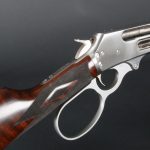 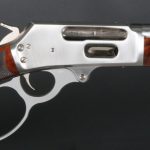 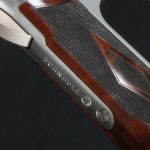 I hope you will all be enjoying some fresh venison or wild Turkey at your Thanksgiving feast.
We will all be out hunting in the morning before enjoying a hearty meal.

I wanted to share with you a few pictures of a rifle we built for one of our customers.

It started with a phone call last December, Tom called and said he would like a Marlin Guide gun, I suggested where he could buy one.  He immediately responded that he wanted a Turnbull gun, He wanted a custom stock and forend with 24 LPI checkering and a large loop lever, so he could wear gloves. His favorite round  is 45/70 and he didn’t want to worry about rust. We ended up finding  a  1895 SS Marlin Guide gun as a perfect base gun to begin this project.

In Preparation for building this gun we went through our highly figured stock blanks and picked out a 2x/3x candidate to make the stock and forend from.

The first thing we did after receiving the gun was to disassemble it.  We degreased all of the internal parts.

We took the original stock and placed it on our stock duplicator. This removes most of the excess wood from the stock and leaves a rough shaped blank with the general overall dimensions of the finished stock. We then hand finished the shaping of the stock, using a rasp and sandpaper. We also inlet the stock to the frame of the 1895. We also turned the new forend with the general dimensions and fit of a Winchester style forend, we  inlet and contoured this to fit the beefier Marlin receiver, barrel and mag tube.

When the wood was completely shaped and sanded it was then given to Ryan. He in turn hand checkered the Stock and forend in a traditional Marlin F pattern and finished the wood using the Turnbull proprietary stain and wood finish.

While this was going on Sam built a large lever loop to fit the gun. He used an aftermarket lever loop as a template and shaped the loop to look like a traditional large loop lever as done by Marlin.

At this point the gun was reassembled and the gun was test fired for function and accuracy.

The pictures above show the progression of the firearm. The last photos below show the end results.