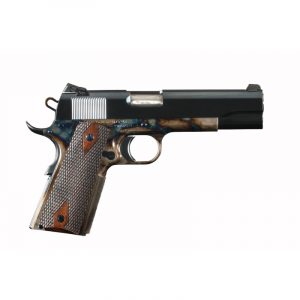 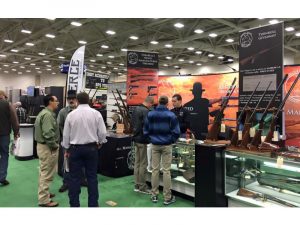 Doug speaking with attendees of the DSC 2016 show.

Turnbull was honored to be a part of the Dallas Safari Club Conservation Convention, one of the first shows of 2016. This exciting convention lasted from January 7th until the 10th. In essence, this convention is hosted every year for big game hunters and other attendees to boost the efforts of conservation. The event included everything from seminars and exhibits to auctions of weapons and other items. This is where we came in. We have been proud supporters of the DSC, and this year were pleased to be able to donate the Turnbull BBQ Commander Heritage 1911 to the Dallas Safari Club. This specific gun was soon auctioned off to Adam Biondich.

Many of the visitors and other attendees to the convention took a lot of interest in the new guns we had on display for 2016, of which there was a lot to see. Our latest 1911’s come standard with a useful and elegant checkered front strap, a beavertail grip safety, adjustable tritium night sights from Kensight and a Commander style hammer.All of these features were added to ensure that the gun is of the highest quality. Turnbull is really proud of these models, and we could tell that attendees found them quite interesting as well.

Throughout the duration of the convention, we spoke to numerous students that are currently going to school in order to be gunsmiths. We helped to answer any questions they had about working with antique guns and specifically on lever actions. We believe that they came away with some useful tips and knowledge from those that have garnered experience as gunsmiths. Doug was the main attraction throughout the convention. Several people came to the booth during the convention to talk with and get photographed with him. Our booth was a sizable one. In fact, we had a newly manufactured and restoration section of our booth that was designed to display how our restoration services work.

In the restoration section of the booth, we had a number of examples of guns which have been restored sitting right next to the originals of the same model. This worked wonders in showing visitors and attendees the huge difference between restored and non-restored models. We even sold a few of the original guns that we had on display at the show. The manufactured section of the booth was designed to display a number of our new models, including our TMC 1886 and all Turnbull Model 1911’s. Overall, this was a fantastic show and we can’t wait to be back again next year. We hope to be in the same booth, #4328.